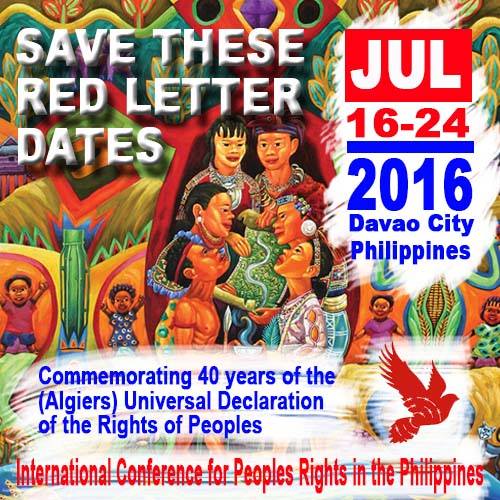 [[{“type”:”media”,”view_mode”:”media_large”,”fid”:”1478″,”attributes”:{“alt”:””,”class”:”media-image”,”style”:”width: 350px; height: 350px; margin: 5px; float: right;”,”typeof”:”foaf:Image”}}]]
Commemorating 40 years of the Universal Declaration of the Rights of Peoples
16 – 24 July 2016
Davao City, Philippines
The International Coalition for Human Rights in the Philippines (ICHRP), Initiatives for Peace in Mindanao (InPeace), KARAPATAN Alliance for the Advancement of People’s Rights, and Ecumenical Voice for Human Rights and Peace (EcuVoice) invite friends to the International Conference for Peoples’ Rights in the Philippines (ICPRP) from July 23 to 24, 2016, in Davao City, Mindanao, Philippines.
The conference, organized also in cooperation with the International League of Peoples’ Struggles (ILPS) and BAYAN (New Patriotic Alliance), will gather human rights organizations and social movements in different parts of the world.
The ICPRP aims to build on the gains of the 2013 International Conference for Human Rights and Peace in the Philippines (ICHRPP), which raised the discourse on peoples’ rights and strengthened efforts to forge international solidarity, not only for the Filipino people, but also for all struggling peoples of the world.
The ICPRP coincides with the 40th year anniversary of the Algiers Universal Declaration of the Rights of Peoples which recognizes the indivisible link between individual and collective rights; the interrelations between economic, cultural, and civil and political rights; and the right of the oppressed peoples of the world to fight for their liberation.
Today, these rights enshrined in the Algiers Declaration are more gravely threatened than ever with the rising state-sponsored terror and militarism aimed at pushing back the historical gains made by the peoples’ movement in favor of corporate interests.
We also urge you to participate in the following activities:

4. July 23 to 24 International Conference for Peoples’ Rights in the Philippines (ICPRP)

5. July 25 People’s mobilization during the President’s State of the Nation Address (SONA) in Manila

To register, and for more details, please send a message to: icprp2016@gmail.com
Registration Fees:
ICPRP and related activities (Check-in from afternoon of July 20, check-out on the morning of July 25)