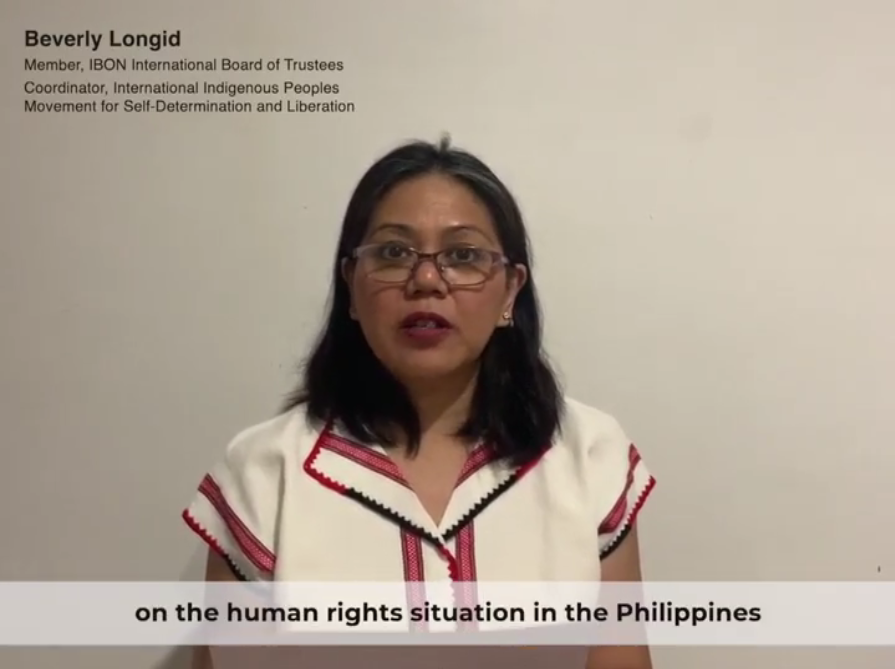 IBON International submitted a statement at the 44th Regular Session of the UN Human Rights Council on 30 June urging all delegates to adopt the recent UN report on the human rights situation in the Philippines. The report by the UN Office of the High Commissioner on Human Rights found that “long-standing human rights concerns have become more acute over the recent years” with thousands killed with impunity in the name of false “drug war” and so-called “national security” policies. Hundreds are also arbitrarily arrested and detained without fair trial, while human rights defenders, peoples’ organisations and civil society are harassed and criminalised.

IBON International urged all member states to vote in the affirmative on adopting the UN report’s recommendations including conducting an in-depth independent international investigation into the human rights situation in the country. The organisation was represented by Indigenous Peoples’ rights activist Beverly Longid who is among human rights defenders who are victims of state attacks. Longid is a member of IBON International’s Board of Trustees and the coordinator of International Indigenous Peoples’ Movement for Self-Determination and Liberation.

IBON International welcomes the High Commissioner’s report on the human rights situation in the Philippines and supports the joint statement of 31 UN Special Rapporteurs stressing “the systematic assault on the most basic rights of Filipinos at the hands of the Duterte government.”

Before this session, new cases of violations emerged, highlighting the continuing rights abuses amid the pandemic.

The government tags CSOs as terrorists or communist sympathizers, a ‘threat’ to national security.

As a human rights and Indigenous Peoples’ rights activist, I myself have been vilified. A week ago, the Cordillera police associated me with the revolutionary New People’s Army (NPA).

In Northern Samar, the strafing of a student activist’s house last June 20 led to the deaths of two individuals and wounding of two others. They too were red-tagged by state forces.

Peasant and Indigenous Peoples’ communities are primary targets of counterinsurgency. In Mindanao, the military continuously threatens to close down remaining Indigenous schools, systematically depriving Lumad children of their right to education.

Thus, we urge the UNHRC to adopt the High Commissioner’s report and assign a special rapporteur on the Philippines to ensure the implementation of the report’s recommendations.