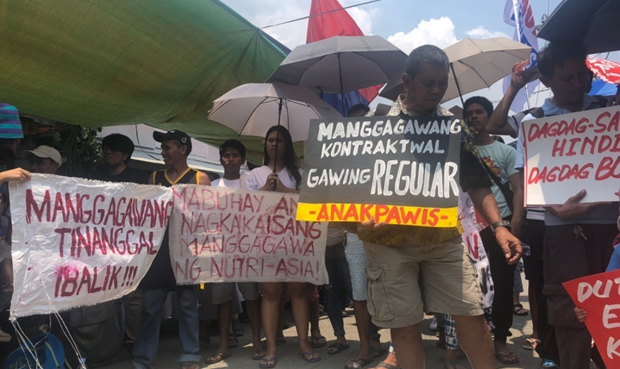 “We workers make NutriAsia goods found in every house in Philippines and we ourselves starve as we sleep every night.”
– A worker at the picket line

It was a long and tiring two-hour journey from Quezon City to the picket line of the NutriAsia workers, in front of afactory in Bulacan. However, we could not be tired enough yet. We reached the area and walked to the picket line, slogans filling the air with the demand for justice. The sun burned the ground with its rays, but the burning rages within people were more intense than their burning skin. [NutriAsia Inc. and its contractors employ workers to produce major condiment brands in the Philippines. -Ed.]

The set up near the picket line made way for known leaders of various women, LGBTQI, workers, peasant movements and even Christian associations to come together and make solidarity speeches. They made the workers aware that they were not alone. The spirit of the people at the picket line was reflected in their raised signs and placards as well. Hence, the social message was sent to these big corporations that the workers of the Philippines do not approve of the injustice met out to them. They did not approve of the contractual employment system under which many of them were employed. [Also known in the Philippines and in other countries as “contractualisation,” where workers are hired not by the principal company such as NutriAsia but through “agencies” or employment contractors; an arrangement that cuts costs for the company but leaving workers prone to abuses as employer responsibilities are weakened. -Ed.]

I was given relevant information about the ”contractual system” of employment before visiting the picket line. However, the inside story only came from the workers themselves; workers, who were sitting by the walls near the sidewalks, burning in the heat and struggling for their demands. A few people stood on the road to block all vehicles that belonged to NutriAsia, that is, to halt the corporation’s daily operations as part of the strike.

When we sat down to talk with the workers, they spread a sheet of tarpaulin with great respect and made us sit with them. A few of them were really keen on sharing their struggles to help us understand their situation better. The language was a barrier between the workers and me, as someone who does not speak the local language. But through videos, which I recorded for later translation, as well as notes of other participants, I understood the significance of the workers’ assertions.

The workers explained that their pay was 380 Philippine pesos per day at a no-work-no-pay basis. Expected length of daily work is twelve hours and overtime pay amounts to 59.38 an hour; with an additional 4.75 an hour for graveyard shift. The contractual workers are not entitled to sick leave. Interestingly, the corporation assumes that workers are not supposed to get sick in any case and work for 7 days a week. This is not just impractical, but inhumane. If in case their body gives up to the pressure of work, or the weather affects them in the most natural ways towards falling sick, they are constantly bothered with calls from management scaring them with threats of suspension.

The vulnerable economic conditions of the poor drive them to sign contracts to at least survive their day-to-day life. This vulnerability is seen by the corporations as an opportunity to further exploit the workers and deprive them of rights. A worker needs motivation to be constantly involved in the work. When there is no motivation, the workers just become like a machine. However, even the machine breaks down once in a while when overworked.

The workers explained how difficult it is to survive in such a low level of salary. The transportation, food, rent, etc. costs a lot from their income. Even if they wanted to, they cannot have a good life themselves and pass it on to their children. They speak out about risking their life everyday in precarious work conditions and still not being able to receive what they deserve. Despite working within temperatures of almost 80 degree Celsius, they still don’t receive medical aid. Workers recall amounts being deducted from their salary for social security, but some say they are not receiving it in full, among other issues. The unfair means used in these arrangements, by the company along with the contracting agencies such as B-Mirk, to exploit the workers have driven them to this struggle — because remaining quiet has not led to justice.

Force was used upon by policemen against the workers in the past, to disperse them and attempt to end the struggle. Workers have been arrested by policemen creating a dispute, but blaming it on the workers and arresting them. The workers who fell to the tactics of the powerful could only weep in sorrow in the police station. Some recalled being made to remain in a cell with rapists, which seem rather unfair for the workers who were pursuing a silent movement and who were exercising their right to strike. This is not where the cruelty of the police force stopped. They arrested supporters such as a 15-year-old student and a 48-year-old man who belonged to KADAMAY, a movement of the urban poor. [The case being referred here is the first dispersal last mid-June 2018. In the second case on 31 July, 19 were arrested including five journalists. – Ed.]

The contracting agencies create confusion regarding the status of workers’ pay: whether the Manila Area wage rate applies to labourers that belonged there or the Bulacan Area wage rate. In whichever case, the rates of both the areas have increased but the salaries of the NutriAsia workers have not increased. [In the Philippines, minimum wage rates vary per region, prompting progressives to call for a national minimum wage and draw attention to the amounts needed for a family living wage. – Ed.] There are unjust deductions from salaries of the workers, even from those who are contractual. This has shocked the workers as to the level by which the corporation and the contracting agency have stooped. The extraction of the benefits to which the workers are entitled shows a cycle of exploitation and a corrupted system. Working arrangements have made regularisation far from the workers’ reach, despite years of being employed.

The unhappiness with the Department of Labor and Employment (DOLE) and its unwillingness to take an action has kept the workers waiting. The workers were surveyed and interviewed by the DOLE regarding their condition. As of now, the workers only expect some action to be taken in response to the factory survey conducted. [The Philippine labour department had reversed its initial ruling that now favours NutriAsia and B-Mirk, the biggest contracting agency in the factory. This is an outcome opposed by the Nagkakaisang Manggagawa ng NutriAsia (United Workers of NutriAsia)– Ed.]

The workers only expect to be regularised and claim the rights they deserve, with their demands addressed. The end to this unjust and inhumane treatment is the only way out of the misery for the workers. This movement has become a movement of everyone and not just the workers because it represents the misery of a larger population than just the workers. The availability of cheap labour does not provide big corporations, like NutriAsia, the right to exploit labour. It’s a struggle against capital, and for worker’s rights. ###

Vidushi is an intern at IBON International, pursuing a Masters Degree in International Relations at the University College Dublin, in Ireland. These are her reflections on a solidarity trip at a workers’ picketline in Bulacan last 23 June, as part of a caravan of people’s organizations. As of 31 July, the picketline of the NutriAsia workers was violently dispersed for the second time, weeks after the Philippine labour department reversed its original ruling that the company and its biggest hiring agency, B-Mirk, are found to be engaged in illegal labour-only contracting.