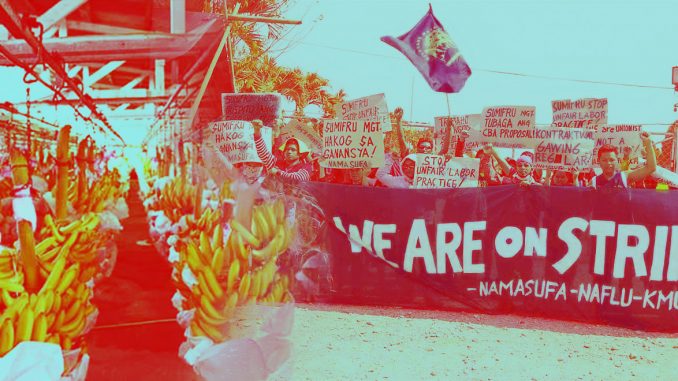 Amid rising inequality worldwide and the continued dominance of neoliberal policy norms that infringe on workers’ rights, various workers’ actions and people’s assertions sparked in the global South.

Against the legacies of neoliberalism in Latin America

Union-led general strikes marked Argentina in 2018 as President Macri and the International Monetary Fund (IMF) sealed a USD 57 billion loan,[i] amid a devaluing currency. With loan conditionalities leading to cuts in social spending and boosted debt payments, Argentine protesters opposed the IMF loan and its neoliberal policy conditions, and asserted the need for higher wages.[ii]

In the city of Matamoros in Mexico, near the US-Mexico border, 25,000 workers in maquiladoras held a strike in January 2019, halting operations in 41[iii] of the estimated 115 such factories in the city.[iv] The unionised workers that manufacture automobile and electronic parts, medical equipment, among others, demanded a 20% wage hike and a bonus of more than USD 1,600.[v][vi] The North American Free Trade Agreement (NAFTA) is said to have contributed to the growth of the maquiladoras,[vii] which are “foreign-owned, controlled or subcontracted manufacturing plants that process or assemble imported components for export.”[viii]

In the North African country of Tunisia, amid IMF advice against increasing the wages of more than 600,000 public sector workers, the Tunisian General Labour Union sparked a general strike in January 2019. Thousands participated in the strike that also called for the end to the government of Prime Minister Youssef Chahed,[ix] continuing protests in 2018 against the state-imposed austerity in the middle of an economic crisis.[x]

Meanwhile, an estimated 12,500 miners of platinum at the South African mining company Sibanye-Stillwater stopped work in January 2019,[xi] in solidarity with gold miners who launched a strike over wages against the same corporation in November 2018.[xii] In Zimbabwe, state repression and violence marred a January 2019 nationwide strike against price increases and the government’s inability to address the prevailing economic situation.[xiii]

Waves of workers’ actions in the Asia-Pacific

An estimated 50,000 garment workers[xiv] in Bangladesh faced police repression of their protests, after launching a strike over wage issues. With the strike lasting more than two weeks, garment workers called the resulting USD 0.25 wage increase “unjust.” A large part of the country’s export incomes supposedly come from its clothing production for transnational companies such as Walmart.[xv] This is said to have reached USD 30 billion in 2018.[xvi]

In India, an estimated 150 million workers participated in a two-day strike in light of Prime Minister Modi’s anti-labour policies. Described as a “historic event,”[xvii] this follows last year’s big mobilisations of farmers and indigenous peoples in the Kisan Long March, and amidst the continuing national liberation movement in the Indian countryside.

In the Philippines, where a so-called “wave of worker activism” has been observed,[xviii] various workers’ actions have emerged in 2018, amid the continuation of the longest-running armed revolutionary struggle in the region. This includes the ongoing struggle of the Nagkahiusang Mamumuo sa Suyapa Farms union of banana plantation workers at Sumifru Corporation, asserting rights to regular employment and against repression under military rule in Southern Philippines.[xix] The Sumitomo Corporation, the Japan-based transnational corporation and conglomerate owning Sumifru, is 85th among the biggest non-financial corporations in the world, ranked by foreign assets, according to UN Conference on Trade and Development data.[xx]

Workers’ political and economic rights remain under attack as struggles for wages and larger claims to people’s sovereignty start to resound in some parts of the global South. A 2018 International Trade Union Confederation report points to how 54 of 142 countries obstruct workers’ free speech and assembly. Sixty-five percent of the same number of countries excludes some workers’ groups from labour law, while 87% have at some point violated the right to strike. Eighty-one percent deny at least some workers’ collective bargaining rights. [xxi]

Workers, together with other toiling sectors, are important actors in today’s world marked by rising inequality.  Strikes and other forms of collective assertions are essential means through which workers and toiling sectors assert their political, social and economic rights. Workers defence and assertions of their rights are steps forward in their huge role in larger processes of social transformation towards democratically-owned development in the global South. ###