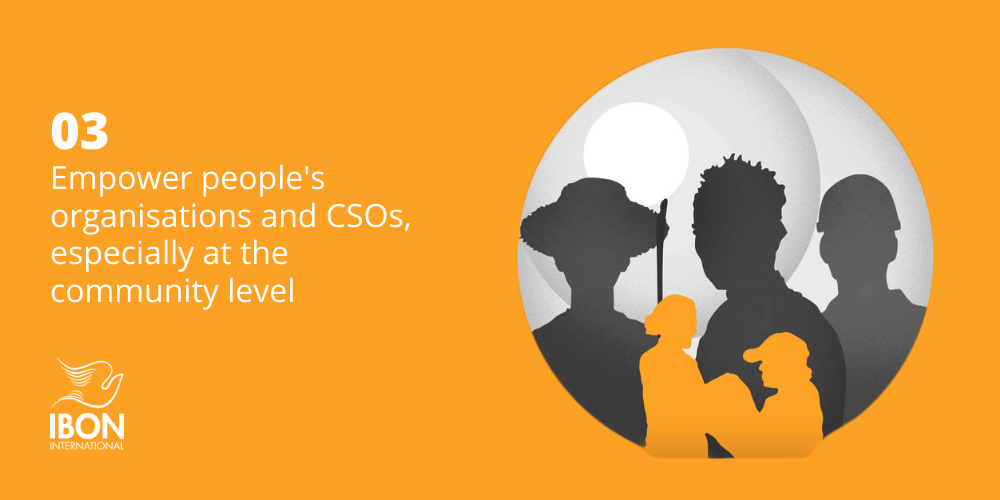 For civil society and peoples’ movements, vigilance against abuses and solidarity with grassroots struggles are most necessary in the face of a pushback against peoples’ rights.

For many countries, the novel coronavirus (COVID-19) has opened a Pandora’s box of underlying social problems: from hollowed-out healthcare and welfare systems, government inefficiency and neglect, to pre-existing entrenched inequalities, all of which contribute in compromising our peoples’ defences against the fatal impacts of pandemics and disasters.

Governments are employing multiple strategies to slow the spread of the virus: lockdowns, quarantines, shutdown of industries and services, closure of roads, and borders. Some, however, are also weaponizing the situation to roll back fundamental rights and push the limits of democratic checks and balances in a bid to stifle dissent and consolidate authoritarian rule. UN Secretary-General Antonio Guterres has warned as much, stating that “the crisis can provide a pretext to adopt repressive measures for purposes unrelated to the pandemic”.[i]

For civil society and peoples’ movements, vigilance against abuses and solidarity with grassroots struggles are most necessary in the face of a pushback against peoples’ rights.

The rising number of infections and fatalities because of COVID-19 runs alongside rights violations all over the world. Quarantines and lockdowns of indeterminate length have negatively impacted the livelihood and incomes of peoples, but especially with daily wage earners, informal vendors, agricultural workers, and local producers. While preventing or limiting contact among people to avoid community transmission of the virus is essential, much of the measures employed by governments fail to meet human rights norms and, often, are enforced in an arbitrary, discriminatory, and brutal manner.

In Kenya, police brutality during the initial 10 days of the country’s dusk-to-dawn curfew has resulted in the death of at least six people.[ii] In Honduras, protesters asking for food were met with teargas and threatened to be shot with live bullets by the police.[iii]

Countries are implementing emergency laws that do nothing to address the pandemic, but place broad power and excessive control in the hands of notorious human rights violators. In Hungary, the parliament has granted the minister the ability to rule by decree indefinitely.[iv] In Thailand, government is clamping down on free speech as critics and whistle-blowers face lawsuits and intimidation, including threats of disciplinary action for medical staff exposing shortage of medical supplies.[v] In Cambodia, the draft law accords the government to “adopt any measures” it deems appropriate.[vi]

This authoritarian overreach has allowed some governments to silence peoples’ movements, civil society, and media. In Myanmar, Egypt, India, China, South Africa, and Russia, laws have been passed penalising the promotion of false information, but human rights activists are concerned that such laws may be used to curb free speech and censor information. A number of journalists have already faced harassment for reporting about the ways in which their respective governments have mismanaged the crisis.

In the Philippines, President Rodrigo Duterte himself has appeared on national television on several occasions openly threatening violence against critics, especially the Left. The government has been criticised for heavy-handed enforcement of the community quarantine, with nearly 30,000 “quarantine violators” arrested nationwide,[vii] instead of focusing on health-based preventive measures and providing social assistance to communities in need.

Moreover, the Duterte administration tags legitimate protest actions demanding government support and accountability, as well as grassroots initiatives, as ploys by “communist groups.” Early in April, residents of Sitio San Roque, an urban poor community in Quezon City, who went out on the street to ask for food and assistance were violently dispersed; 21 protesters were detained.[viii] The police insisted it was a protest organised by progressive urban poor group KADAMAY despite the community’s testimony that it was spontaneous. Most recently, seven volunteers of peasant advocacy groups Tulong Anakpawis (Toiling Masses Support Group) and Sagip Kanayunan (Save the Countryside) on their way to a relief mission were stopped, detained, and charged by the police in Norzagaray, Bulacan for supposedly violating quarantine protocols and for sedition.[ix] In both incidents, the detained were released after paying exorbitant amounts of bail.

Healthy societies must protect and promote peoples’ rights and sovereignty

Civil society and peoples’ movements play an important role in ensuring vulnerable and underserved communities have access to needed protection, care, and social services during crises… Such initiatives, besides filling in the gaps in the government’s emergency response, empower people to realise their own sovereignty and allow us to imagine alternative ways of organising societies beyond existing profit-driven models.

States must remain steadfast in maintaining a rights-based approach to facilitate the emergence of healthy societies with rule of law and human rights protection.

Extraordinary crises may at times require extraordinary measures, but human rights must remain at the centre of states’ deliberations. COVID-19 should not be used as a cover by tyrannical governments to further adopt measures that violate human rights and restrict freedoms. Nor should it be a pretext for other states with claims to democratic traditions to dodge accountability and further diminish the fundamental rights of their people.

As affirmed by UN human rights experts in a statement, States must remain steadfast in maintaining a rights-based approach to facilitate the emergence of healthy societies with rule of law and human rights protection. As articulated in our Eight Global Action Points for People-Centred COVID-19 Response and Beyond, a truly rights-based approach must include the full range of working peoples’ rights: economic, social, cultural, and civil-political.

In many countries, civil society and peoples’ movements play an important role in ensuring vulnerable and underserved communities have access to needed protection, care, and social services during crises. In the Philippines, peasant communities engaged in collective land occupation and farming currently supply fresh produce used in relief efforts organised by peoples’ movements to urban and rural poor areas that have not been reached by government aid. Such initiatives, besides filling in the gaps in the government’s emergency response, empower people to realise their own sovereignty and allow us to imagine alternative ways of organising societies beyond existing profit-driven models. National actors and the international community at large are called to support such initiatives and oppose any efforts undermining the exercise of peoples’ sovereignty.

One of the greatest pitfalls of the emergency responses supposed to protect the public during extraordinary circumstances such as COVID-19 is that they can become permanent. COVID-19 has enabled many governments to enact policies harmful to our health and democracy, which can become institutionalised if left unchallenged.

But people are increasingly finding ways to collectively express their resistance in creative and resourceful ways. “Social media rallies” are being organised online to vocalise their discontent or highlight peoples’ demands on pressing issues. Activists are holding webinars and online conferences. When protocols allow, people are able to hold public demonstrations while observing social distancing. All these offers us renewed strength to continue to struggle to ensure that the post-COVID-19 future is one where peoples’ rights and sovereignty will be progressively realised. ###