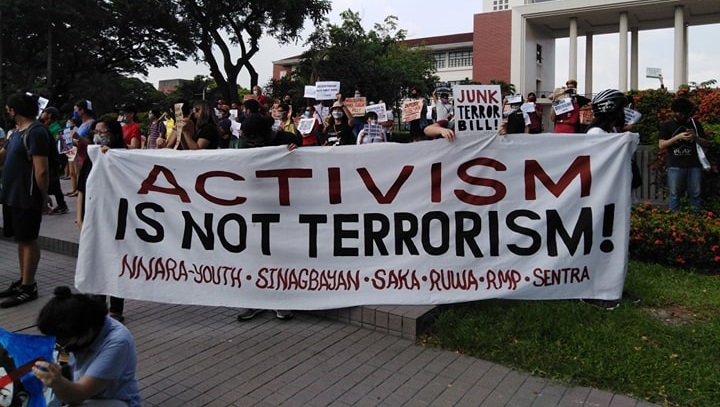 *Note: The Philippines’ Anti-Terror Bill, mentioned below, was signed into law by the President last 4 July. Read our quick response to its passage here.

Today, the world’s working peoples face a recession and a pandemic that aggravate crises and pre-existing inequalities. We are seeing a repressive turn of many states as they use the pandemic to consolidate their rule, while leaving unaddressed long-running people’s grievances on economic conditions, health systems, elite power, and systemic violence. Some states deploy yet again the loose notion of “terrorism” as legal cover for systematic and open violence against the people.

IBON International joins the broadening clamour against the dark clouds of state-sponsored crackdowns that shroud even the most basic civil-political rights. We stand in solidarity with peoples from Palestine to the Philippines, and even in the United States (US), in defending their rights. We assert that there can be no genuine people’s development without civil-political rights, for they are foundations for long-term possibilities of people’s leadership, and substantial power to shape, development paths and governance.

The outbreak of crackdowns

IBON International is highly concerned that we have actually seen a setback on basic rights. At one point, billions of people were under some form of lockdown. In the process, at least 33 countries implemented measures that impeded the right to free expression, 29 countries with measures that intruded on privacy, aside from the 112 countries with measures that restricted assembly.[i] Even the UN Office of the High Commissioner on Human Rights (OHCHR) was alarmed about “highly militarised” responses, and stated that emergency powers must “not be a weapon” to “quash dissent, control the population, and even perpetuate their time in power.”

But crackdowns continue in the global South, and even in countries such as the US. President Trump called protesters “terrorists” and unleashed more policing, after the killing of George Floyd that has sparked mass actions and bigger issues of political and economic oppression.  In Kenya by early-May, police violently responded to protesters who opposed forced evictions from neighbourhoods and the closure of community markets amid crisis. Under Bolsonaro’s right-wing rule and the pandemic in Brazil, police tear-gassed protesters condemning police killings in neighbourhoods, after a recent case of a 14-year old killed while at home.[ii] State oppression continues for peoples under siege of military occupations: 57 activists have been arrested in West Papua in the last five months; in Palestine, aside from continuing oppressive prison and border regimes, Israeli forces recently killed Iyad Halak, a man with autism, and threatened Warda Abu Hadid, a careworker.

So-called “counter-terror” legislation, already prevalent across the global South, continues to be a legal cover for open and vicious repression. Chile was known for using “anti-terror” laws to criminalise indigenous activists. Amendments on such laws were an issue in Ethiopia in early 2020. In Hong Kong, a national security law threatens to whip dissent. In the Philippines, with its bloody record of killings in  the false “drug war” and militarist “counter-insurgency,” the Duterte administration has been railroading a so-called Anti-Terror Bill in the legislature, dubbed by many as being a manifestation of “state terror.”

Faced with growing criticism against state repression, the Philippine government has retaliated with more repression. The current “terror bill” in the Philippines was certified as urgent by the President and by high-ranking generals in his Cabinet, despite pressing health and economic responses to the pandemic needing attention, and would replace an existing “human security” law. The new bill casts an even wider net in an even more vague definition of “terrorism,” punishable by life imprisonment without parole. Engaging in political speeches, or even carrying materials and publications that the Philippine state deems “facilitating” of “terrorism” would be punishable by 12 years. It would foster warrantless arrests with longer jailtime compared to prior laws. Assets of those anyone accused of terrorism could be frozen, which would be easily used to close down civil society operations. It would expand the scope and pretexts for surveillance and wiretapping.

It is a reaction to already brewing discontent and stronger demands for accountability, in the context of the Philippine government’s atrocious human rights record. The Philippines’ lockdown also set back civil-political rights, and the UN OHCHR criticised the state’s rights violations against so-called “lockdown violators.” Police committed violence and abuse against women. Before the pandemic, it ranks among the worst countries for workers as well as environmental and land rights defenders. It has implemented Martial Law in the whole island of Mindanao for years in the name of “counter-terror.” The UN OHCHR has called out rights violations in the murderous “drug war” and against rights defenders. The institutionalised state practice of tagging critics as “communist fronts” was criticised by the Philippines’ Commission on Human Rights, for it is a “slippery slope” that “may trigger a number of human rights violations” from “harassment, unlawful arrests, torture, and threats to life.”

IBON International condemns the dangerous Philippine “terror law” for continuing this trend. Should it become law, the Philippines loses all trappings of its already fragile democracy, cementing the administration’s rule as a full-blown, unaccountable militarist dictatorship or a “police state.” A finishing stroke for impunity, certain courts could proscribe organisations and individuals as “terrorists” without trial or due process, and with greater power for an Anti-Terrorism Council. The law would be a death sentence on civil liberties, against people’s organisations and civil society organisations (CSOs) which call out the state’s neoliberal economic agenda, ineffective pandemic response, and repression. Anyone–dissenting citizens, activists, people’s organisations and CSOs–could be in the crosshairs of state forces. This includes IBON, especially our mother organisation IBON Foundation–known for its reliable research work on people’s socio-economic issues for over four decades–which has been “red-tagged” by the administration.

With the pandemic still a problem in many countries especially in the global South, the rights to healthcare, to economic support, and workers’ rights in general remain paramount. Given the current setbacks on freedoms, civil-political rights must be urgently protected. Repression must never be part of a “new normal.” International cooperation and solidarity are still key to supporting peoples and their struggles.

IBON International calls on the international community to heed the outbreak’s lessons on the need for systemic change, as early as now, and for a “new normal” that benefits the people. A “post-pandemic” situation must be people-powered democracy, with strong guarantees of civil-political rights, and where such rights are asserted and reclaimed by peoples by holding states accountable and ending repressive systems. A post-pandemic situation must at the same time put at the centre the people’s right to lead and shape development paths, for economic sovereignty, and not just a “recovery” via capital accumulation amid vast inequalities or a bailout of corporations. Policy shifts for debt cancellations, ending dependence on debt and foreign capital, for progressive taxation and fulfilling aid commitments, remain essential.

We also call on the international community to support and stand in solidarity with movements’ calls to defend people’s civil-political and economic rights, and to stop authoritarian attacks such as in the Philippines—be it in the form of statements, actions, or letters to governments to call for the end to rights violations. We enjoin, aside from people’s movements and civil society, also progressive parliamentarians and parties, church organisations, and people’s lawyers around the world to add their voices. In the Philippines, for instance, there is a need to urgently stop the “terror bill” in its tracks. Actions could also take the form of lobbying, for instance, to end military aid to the Philippine government whose weapons are directed against the people.

We are at a critical juncture. A possible future for the world’s working peoples could either be the worsening rule of unaccountable elites backed by world powers and capital-holders, or a systemic change, a shift in power relations that puts people’s rights and their sovereignty at the centre. ###

USAID in Mindanao: The Other Side of the US COIN