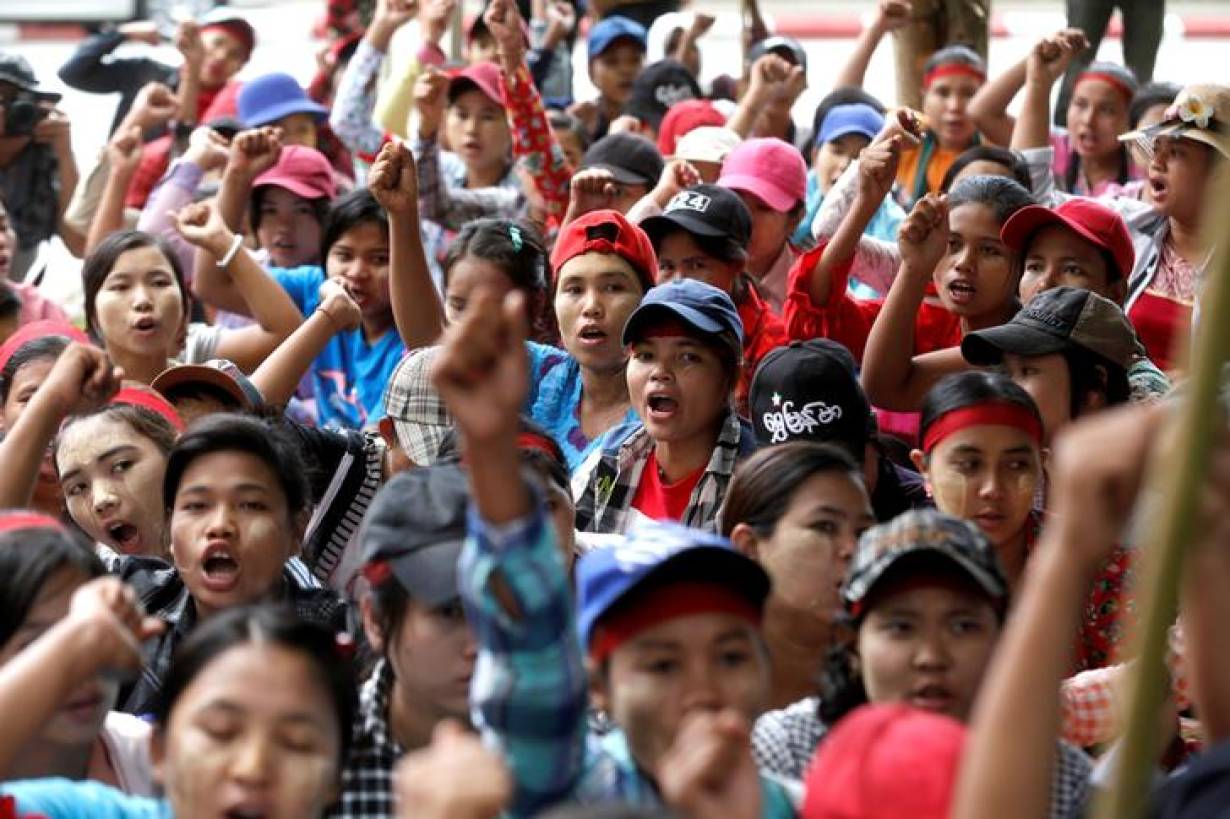 IBON International vehemently rejects the coup, supports the people’s calls to boycott military-owned businesses, end the military dictatorship, and uphold democracy. We condemn the TNCs and IFIs that bankroll the military through business deals and aid.

IBON International stands in solidarity with the people of Burma/Myanmar who are bravely struggling for their rights and sovereignty against military dictatorship. We vehemently reject the coup, support the people’s calls to boycott military-owned businesses, end the military dictatorship, and uphold democracy. We decry the transnational corporations and international financial institutions that bankroll the military through business deals and aid.

On February 1, the military led by General Min Aung Hlaing staged a coup and placed the country under a state of emergency after claims of fraud in the 2020 general election where the military-backed party lost to the National League of Democracy led by Aung San Suu Kyi. The military arrested elected civilian leaders including Suu Kyi herself, deployed soldiers and police in major cities, and obstructed communications. Despite restrictions, the people of Burma/Myanmar were able to quickly organise protests against the coup in major cities and rural areas. The police have intimidated and arrested protesters, violently dispersed them with rubber bullets and water cannons, and even opened fire against them resulting in critical and near fatal injuries.

We condemn the military’s undermining of people’s rights and sovereignty, and the violent attacks against protesters. We call on the international community to support the people’s demands, their repudiation of the long-standing military power, and their right to determine the direction of their political, social and economic life.

We also stand in solidarity with the ethnic nationalities who are asserting their right to self-determination against long-running militarisation and the power of the military, which enable rights violations and the plunder of their ancestral lands by both military-owned and foreign corporations.

The people of Burma/Myanmar have been suffering under decades of military dictatorship since the historical 1962 coup. Despite the formal dissolution of the military junta in 2010 and the establishment of a civilian government in 2011, the military retained their power and influence over the country in the 2008 constitution. Key cabinet ministries and 25% of Parliament seats are reserved for the military. The military even cites Article 417 in the constitution as basis for the declaration of a state emergency and military takeover.

The military and its leader Min Aung Hlaing are facing criminal prosecution for genocide at the International Criminal Court and the International Court of Justice.[ii] The UN Human Rights Council also adopted a 2018 resolution that established an Independent Investigative Mechanism for Myanmar.

The military’s business deals with TNCs replenish its war chest, with resources used in militarising and persecuting ethnic nationalities. These also show the monopoly capitalist system’s propensity to plunder resources in the Global South for profit in complete disregard of people’s lives, rights and sovereignty.

IBON International condemns the role of transnational corporations and international financial institutions (IFIs) in reinforcing the military in Burma/Myanmar, enabling it to commit atrocities against the people. We echo the people’s calls against business deals and political ties with military-owned corporations, as “revenues earn[ed] from domestic and foreign business deals substantially enhances [the military’s] ability to carry out gross violations of human rights with impunity.”[iii]

We are indignant that IFIs continued to provide loans to the militarist government despite evidence from local civil society that showed that these loans, including for the government’s supposed COVID-19 Economic Relief Plan, will worsen conflict and fragilities while simultaneously burdening the people with debt.[iv] The IMF released a USD 350 million in cash just a week before the coup.[v]

Many transnational corporations continue to profit from their business partnerships with military-owned holding companies, such as the Myanmar Economic Corporation (MEC) and Myanmar Economic Holdings Limited (MEHL). The MEC and MEHL monopolise major industries in Burma/Myanmar, owning 133 corporations involved in “construction, pharmaceuticals, manufacturing, insurance, tourism and banking” among others. The military also control the jade and ruby trade, which are mined in Kachin and Shan states.[vi]

UK banks HSBC and Standard Chartered and Israeli company Gilat Satellite Networks provided financing and technology respectively to the military-controlled mobile network Mytel.[vii] Clothing brands Esprit, H&M, and Bestseller sourced from factories located inside two industrial zones owned by the military.[viii] France-based Total owns 31.24% of the Yadana gas field, while US-based Chevron owns 28% which they operate together with the military-controlled Myanmar Oil and Gas Enterprise. Total is also reported to have paid USD 257 million to the militarist government in 2019. Meanwhile, China’s Sinohydro attempted to build a USD 2.6 billion hydro-electric dam which were blocked by Karen communities.[ix]

The military’s business deals with these corporations replenish its war chest, with resources used in militarising and persecuting ethnic nationalities, and, recently, in staging the coup. These also show the monopoly capitalist system’s propensity to plunder resources in the Global South for profit in complete disregard of people’s lives, rights and sovereignty.

We are indignant that IFIs continued to provide loans to the militarist government despite evidence from civil society that showed that these loans will worsen conflict and fragilities while simultaneously burdening the people with debt.

We express our support and admiration to the working people of Burma/Myanmar who are organising massive protests across the country to oppose the military coup. Thousands of young women garment workers are leading general strikes and are joined by transport workers, teachers, doctors, government workers, students and monks. Garment workers are also protesting inside factories by wearing red ribbons or raising the three-finger salute which both signal opposition against the military government.

In rural areas, over 40,000 Karen people from 280 villages protested in front of military camps. They reiterated their calls for autonomy and self-determination, the withdrawal of the military from their communities, and the abolition of the militarist 2008 constitution, and expressed support to workers’ strikes and the civil disobedience movement in the cities. Rohingya refugees who were persecuted and displaced also condemned the coup and called for the end to military rule in Burma.

We call on people’s organisations and civil society to sustain solidarity actions, such as in a Global Day of Solidarity for Burma on 24 February. We enjoin the international community to amplify further the people’s demands against the military regime and structures that support it, and for accountability, democracy, and self-determination in Burma/Myanmar. Various forms of actions were held such as in Indonesia, the Philippines, India, South Korea, and Japan, among others, and global unions[x] have also expressed support.

The Burma/Myanmar peoples’ struggle for democracy is shared by peoples who are also facing harsh neoliberal policies and militarism in their respective countries, such as in India where farmers are protesting against the Three Farm Laws, the Philippines where people are opposing the unconstitutional Anti-Terrorism Act targeting people’s movements and civil society, and in West Papua and Palestine where people are struggling for independence against colonisation. We assert that ending elites’ repressive regimes are necessary conditions for the people to claim their rights and assert their roles in governance processes that affect them. The fight for democracy in Burma/Myanmar is necessary to address people’s economic needs and sovereignty, towards a rights-based and people-centred development.###