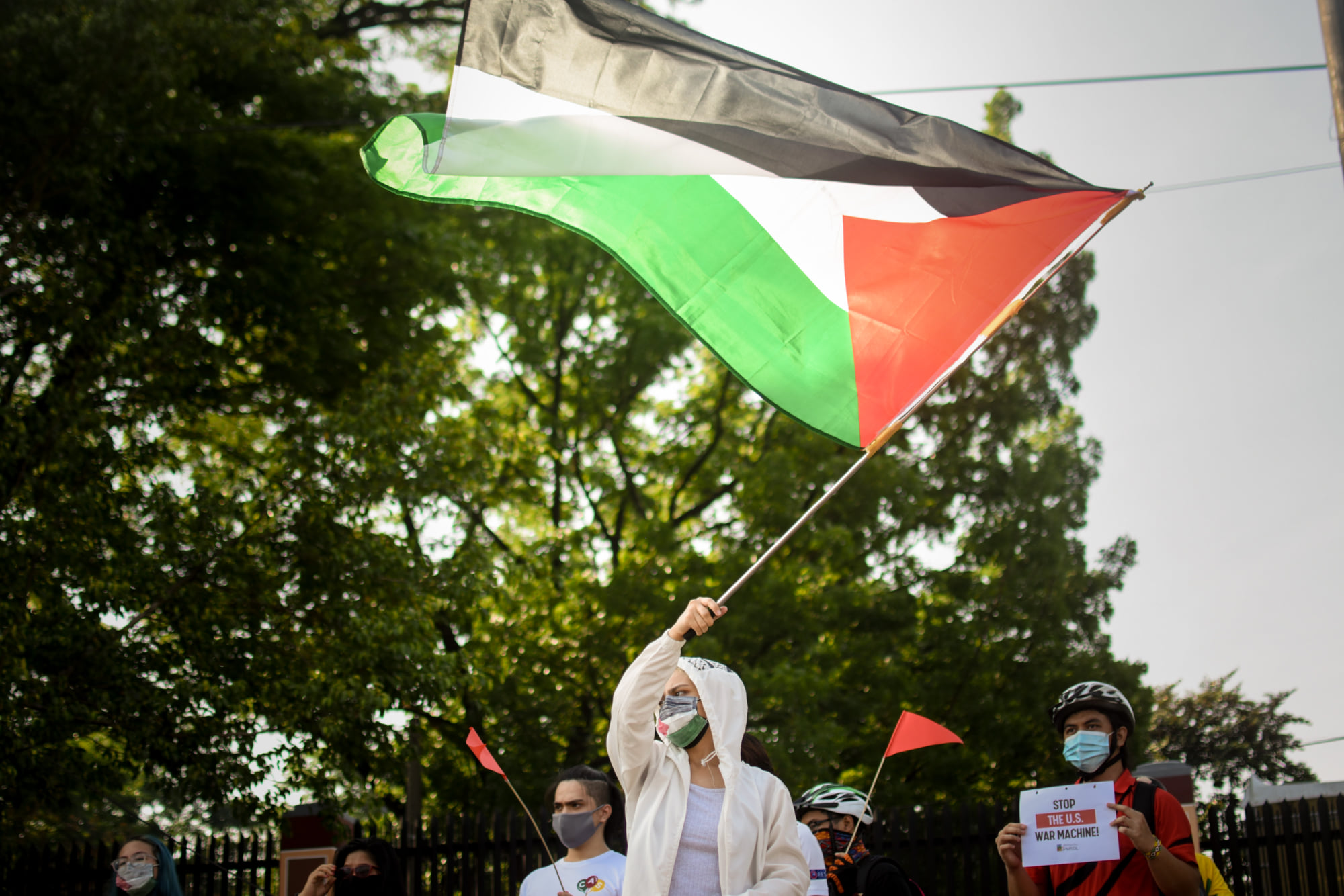 Palestine solidarity action in the Philippines (Photo by Bulatlat)

IBON International stands in solidarity with the Palestinian people’s struggle for rights, liberation, and self-determination against the United States (US)-backed Israeli regime of military occupation and ethnic cleansing. Occupation is a crime and attack against the humanity of all peoples. We support the historic general strike of millions of Palestinian workers, professionals, and students in protest against recent attacks, and join their calls to end the occupation. We join Palestinians in mourning and share their righteous rage for the hundreds killed in Israel’s attacks in Sheikh Jarrah, in the al-Aqsa Mosque on Ramadan, and in Gaza, and continue to call to end military aid to the occupation.

We also call for the unhampered delivery of much needed emergency relief and assistance to those injured, and for the rehabilitation of victims and their communities. We condemn the Israeli violence that has been striking terror in communities: the air strikes that have killed more than 248 Palestinians, including 66 children, and the ongoing mass arrests of Palestinian protesters. Military support from the US has continued to reinforce the Israel Defense Forces as it commits atrocities against Palestinians. In 2016, the US pledged USD 38 billion in military aid to Israel from 2019 to 2028. It has also provided 70 percent of arms to Israel since 2009. In early May, the Biden administration approved the sale of USD 730 million worth of weapons to Israel.

IBON International believes that the Israeli occupation is the biggest obstacle to people’s development for Palestinians. Liberation by and of the Palestinian people is necessary and the precondition for addressing people’s needs, rights, and pursuing any prospects of economic sovereignty and people-centred development.

Land-grabbing, economic blockades, negligence, and discrimination under the occupation have subjected Palestinians to poor and insecure living conditions, and shattered their prospects for development. They are also denied access to education, electricity, water, health and other social services. In Gaza, the Israel-led blockade which stopped external trade has reduced more than 1 million Palestinians to poverty and miserable conditions amid the pandemic.

Amid the ceasefire in Gaza – which was made possible through the unwavering resistance of Palestinians, bolstered by strong international solidarity and support – we continue to demand the accountability of the Israeli occupation and its enablers such as the US and the European Union, for their human rights violations, war crimes and crimes against humanity. We call on progressive parliamentarians and other development actors, to oppose and make use of legal instruments and accountability mechanisms to end the Israeli military occupation and aggression and all forms of support that perpetuates these.

We enjoin peoples to amplify calls for the immediate release of Palestinian political prisoners, who are incarcerated for fighting for people’s rights against the occupation, amid health risks posed by the pandemic. Around 4,500 Palestinians are detained in Israeli jails, including 41 women and 140 children, and face Israeli military courts. Since 2021, Israeli authorities have already arrested thousands. Nearly 400 political prisoners have been infected with the Coronavirus, while 550 suffer from various diseases that require urgent medical treatment, including at least ten who suffer from cancer.

The Palestinian people’s struggle has garnered tremendous international solidarity and support. Mass actions were held in over 100 cities across the world. Activists shut down a factory of an Israeli arms manufacturer in the United Kingdom, and port workers’ unions in Italy and South Africa refused to load arms shipments bound for Israel. Palestinian resistance affirms people’s collective power to attain rights, sovereignty, and freedom from oppression. They continue to be an inspiration for people’s organisations and social movements against military dictatorship and colonial occupation in Burma, West Papua, India, the Philippines, and across the global South. We will continue to be in solidarity with the Palestinian people and movements around the world in the common fight for freedom from all forms of oppression, and towards peace based on social justice. #