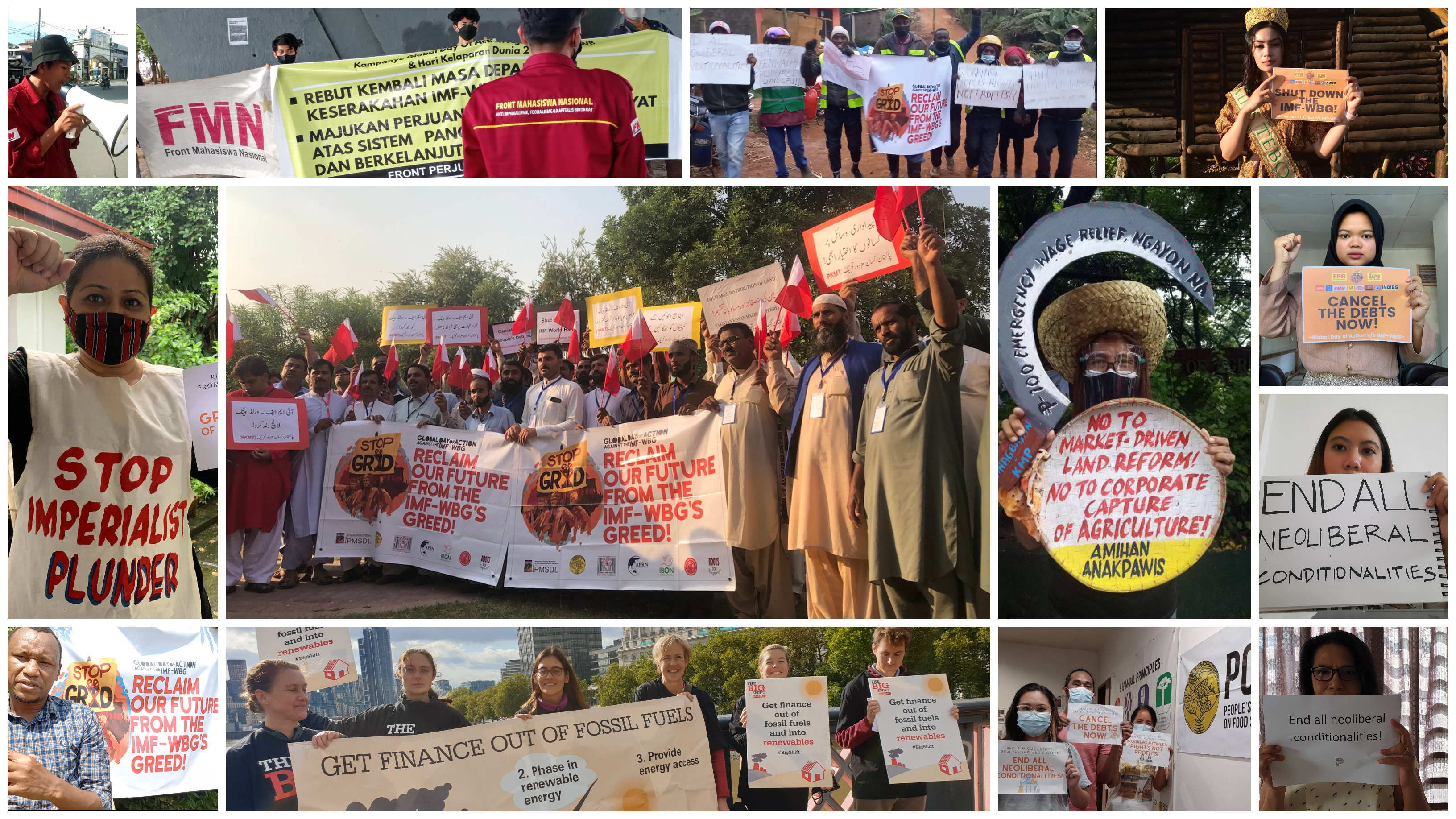 With a banner call to “Reclaim our Future from the IMF-WBG’s Greed,” social movements, people’s organisations, civil society organisations, and networks voiced out their concerns on the current recovery agenda supported by both the WBG and the IMF, the Green, Resilient, and Inclusive Development (GRID) framework.

The Global Day of Action statement raised concerns about how the GRID “belies the WBG’s financing and promotion of dirty energy, and the expulsion of peasants and Indigenous Peoples from their lands for ‘green investments’” and how it “threatens to be a corporate recovery agenda.”

“GRID travels the same path of Public-Private Partnerships, the discontinued Doing Business Reports, and of the Maximising Finance for Development—all champion the corporate capture of development,“ said Jennifer del Rosario-Malonzo of IBON International, a co-organiser of the Global Day of Action.

According to Beverly Longid, Coordinator of the Indigenous Peoples Movement for Self-Determination and Liberation (IPMSDL), also a co-organiser: “The recent 2021 Annual Meetings unsurprisingly showed a bias for big private capital flows to the global South, making the GRID narrative a launchpad for more corporate greed.”

“We reject the broader push to rehabilitate the interests of corporations in the name of economic ‘recovery.’ We need systemic changes for people-centred development, focusing on socio-economic rights, food sovereignty, and the self-determination of Indigenous Peoples,” Longid said. “We do not need a superficial makeover and greenwashing of the current system to further resource plunder in the global South,” she added.

The Global Day of Action Against the IMF-WBG also tackled related issues of economic recovery, including the continuing debt burdens, conditionalities, and the inaction on debt cancellations; and the Bank’s protection of pandemic profiteering in opposing the TRIPS waiver.

Co-organisers of the Global Day of Action included the Indigenous People’s Movement for Self-Determination and Liberation, People’s Coalition on Food Sovereignty, the People Over Profit Network, Asia Pacific Research Network, and IBON International. #

In Defense of People’s Rights (March-June 2013)