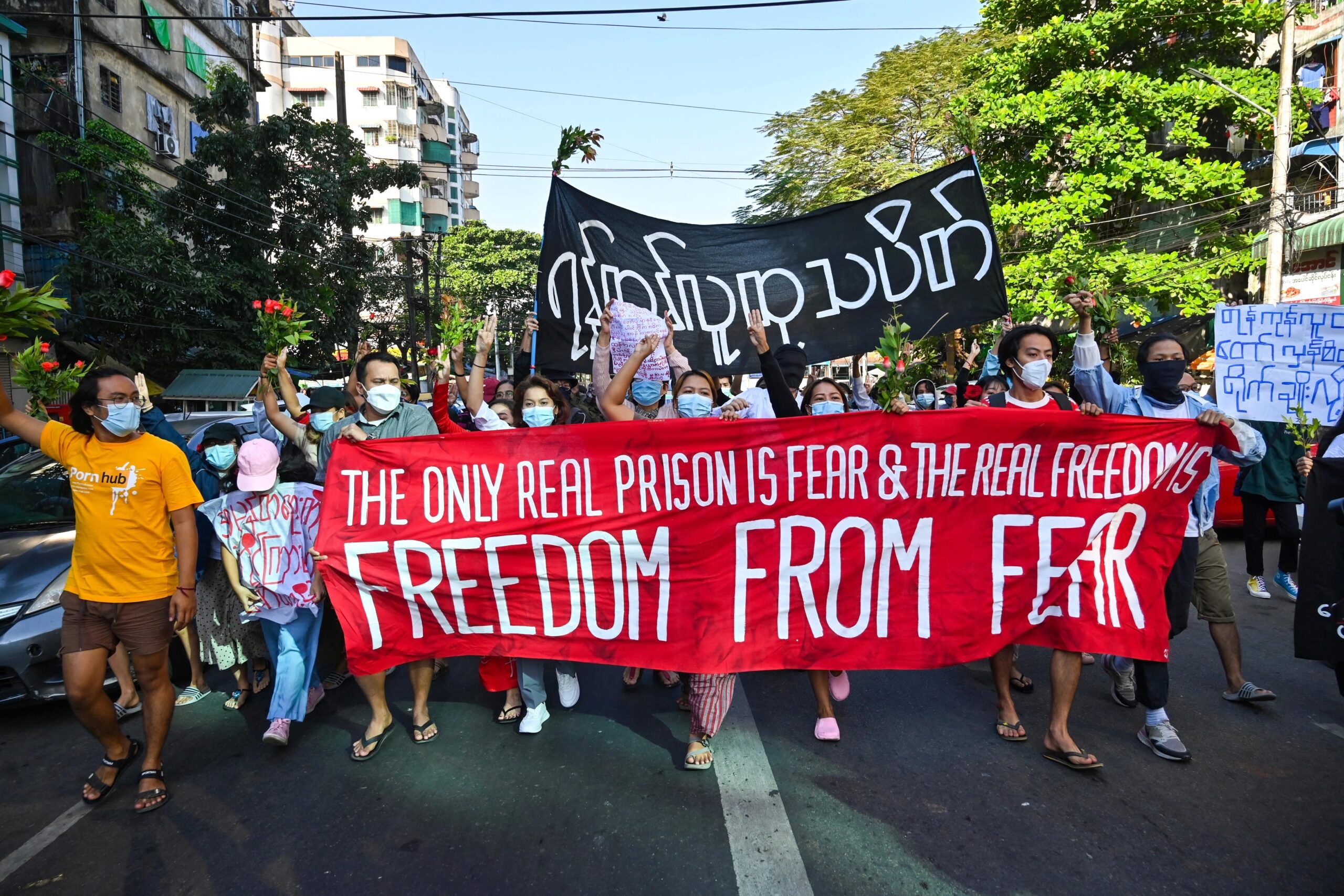 For the past two years, we have learned that a pandemic in a neoliberal world means: irregular and precarious jobs on lower wages, crushing household and national debt amid privatised healthcare, and wars that target the urban poor, peasants, and Indigenous peoples fighting for lives and livelihood.

Women’s unpaid labor props up the world as social infrastructure has been hollowed out by decades of neoliberal policies. People in the global South remain vulnerable to COVID-19 amid weak healthcare systems, and as developed countries sit on a stockpile of surplus vaccines. While the rest of the world’s working peoples reel from the pandemic, the Pandora Papers have revealed that the global elite – including over 330 world leaders and politicians – hide at least USD 11.3 trillion of wealth offshore to evade taxes and scrutiny.

Despite acknowledging the chasm of inequalities, the outcomes of this year’s major global policy fora – from the UN Food Systems Summit and the Annual Meetings of the International Monetary Fund and the World Bank Group to the 26th Conference of Parties of the UN Framework Convention on Climate Change – have shown the same direction in the world’s development course: profit still takes precedence over people’s rights.

IBON International stands in solidarity with working peoples and rights defenders’ continuing struggles. We especially believe that the rights discourse is most relevant to the people in the context of collective actions and defence.

We support the assertions for workers’ rights, such as to living wages, to unionise, and to form their own associations, and for the people’s right over natural and productive resources. Amid the pandemic, we continue to call for health-based responses, including stronger investments in public healthcare, people’s participation in decision-making, and the waiver of Trade-Related Aspects of Intellectual Property Rights (TRIPS). We hold that this waiver is an initial step to helping developing countries respond to the health crisis and pursue economic development.

Many countries have still not recovered from the pandemic-era lockdown on rights, as states resort to ramped-up repression amid crises and discontent. In the Philippines, people and their organisations continue to be threatened with the so-called Anti-Terrorism Act of 2020, which contains provisions on warrantless arrests, prolonged detention, freezing of assets, among other draconian measures. The “terror law,” railroaded within a month last year, gained notoriety after ceaseless campaigning by rights defenders, social movements, and advocates. It also drew numerous petitions contesting its constitutionality, which pushed the Supreme Court to strike down two provisions.

IBON International acknowledges that the people’s clamour – in the Philippines and around the world – pushed the courts to rule against the provision that could treat the exercise of civil-political rights as terrorist acts. We continue to join the calls to completely revoke the terror law, together with other repressive measures such as the Executive Order 70,which infused the supposedly civilian bureaucracy with militarist counterinsurgency objectives. We also join the clamour to defund and abolish the National Task Force to End Local Communist Armed Conflict (NTF-ELCAC), which acts solely as a tool of state terror against rights defenders and activists.

With the current administration’s capture of national institutions for redress, we reiterate calls for the full mobilisation of international mechanisms to facilitate justice for victims and accountability for state perpetrators. We call for the unconditional release of all political prisoners. Of the 709 political prisoners currently detained, 486 have been arrested on trumped-up charges under the Duterte administration. As national elections draw near in 2022, we stand with social movements in rejecting the tandem of the Marcos and Duterte families to maintain their power, as both are guilty of gross human rights violations against the Filipino people.

IBON International also denounces the militarist attacks and repression escalating in many Southern countries. In Myanmar, since the February military coup led by Min Aung Hlaing, 1,318 people have been killed by the military while 7,860 people have been arrested.[1] As the United States (US) government holds a so-called “democracy summit,” it continues to support the Israeli government’s occupation of Palestine. Rights violations continue since the US-backed occupation earned condemnation in May for the mass evictions and destructive airstrikes that killed hundreds of Palestinians. Just this Monday, 16-year-old Palestinian Mohammad Nidal Younis was shot several times by Israeli soldiers at a checkpoint.[2]

After two decades of multi-trillion-dollar worth US invasion that killed hundreds of thousands, Afghanistan suffers from a humanitarian crisis that threatens to worsen in the coming months. Early this December, Indian state forces killed 15 coal miners accused of being militant fighters in Nagaland, where the Armed Forces Special Powers Act (AFSPA) empowers state forces to inflict lawless and lethal violence against civilians just based on suspicion. In Iloilo province in the Philippines, eight farmers were killed in aerial bombings of the military early in December.

Despite the challenges, people’s resistance has achieved many victories this year. More than a year of protests by Indian farmers forced Narendra Modi’s government to abolish the neoliberal three farm laws. The Colombian government withdrew neoliberal reforms following massive protests and a general strike in May. In Myanmar, people from all sectors are courageously resisting the military junta through mass demonstrations, acts of civil disobedience, and even by joining people’s own self-defense units to counter the junta’s brutality. In both the Philippines and Palestine, ceaseless campaigns and legal actions have freed political prisoners, while broader national struggles continue.

IBON International expresses our deepest solidarity with peoples persevering against systemic injustices, and for rights and sovereignty. We call on the international community to stand with people’s organisations and movements fighting for social transformation, breathing life into rights principles through their work. #