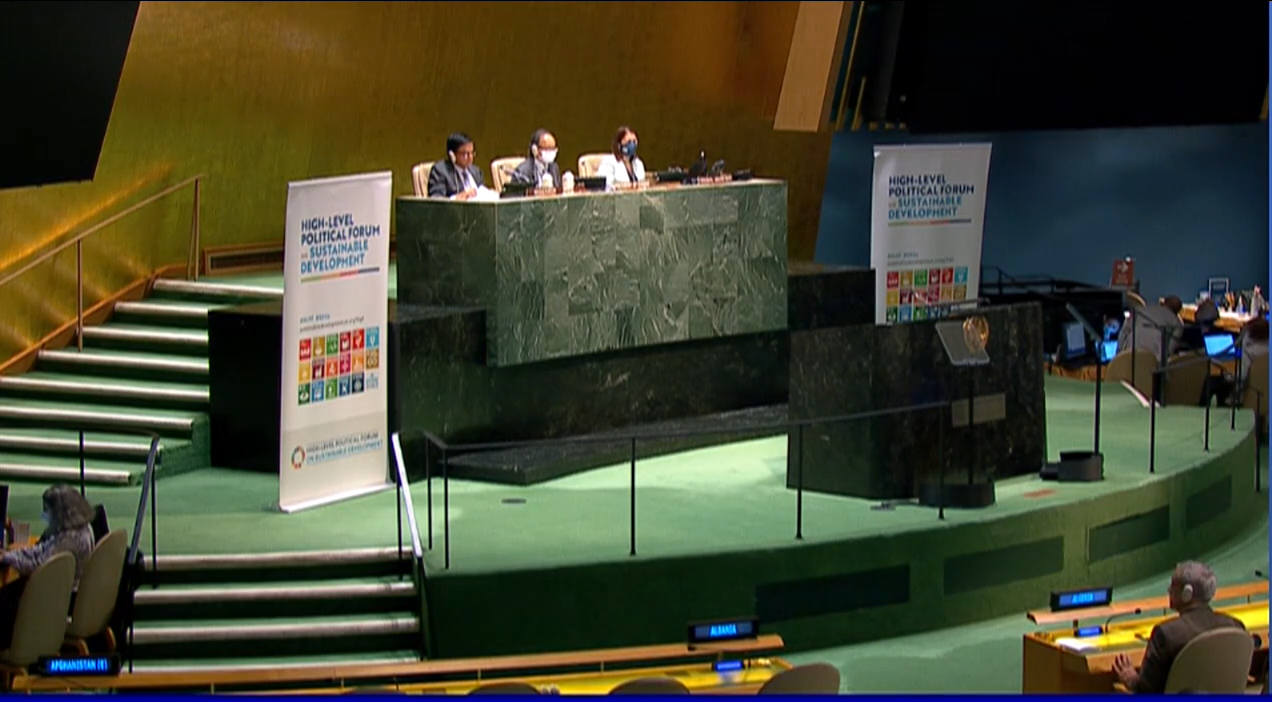 At the moment, policy rhetoric is already different from reality. Prevailing today is a recovery where the wealthy become wealthier and the poor sink further into poverty.

That crisis could be turned into an opportunity rang true, when states, corporations, and international institutions have picked up from ongoing global troubles to put future directions on the agenda. The world faces a reality of overlapping climate, health, food, debt and economic crises—now with worsening war. This has raised the question of an agenda that addresses the multiple crises.

In 2020, some policymakers talked about a “new normal;” some put forward a Green New Deal, supposedly linking public spending with ecological concerns. The representatives of big business at the World Economic Forum advanced a more opaque “Great Reset.” The conversation has since evolved in form. In 2021, the World Bank, supported by the International Monetary Fund (IMF), sketched the idea of a Green, Resilient, and Inclusive Development as a way forward.

This race to name future directions has since settled on a word: recovery. If the world economy has been “sick,” so the thinking goes, it now has to recover.

At the United Nations (UN), the recovery agenda came through the slogan of Building Back Better. The 2022 UN High-Level Political Forum on Sustainable Development (HLPF), held from 5 to 15 July, convened under the theme “Building back better from the coronavirus disease (COVID-19) while advancing the full implementation of the 2030 Agenda for Sustainable Development.”

The Forum’s outcome document, the Ministerial Declaration, reiterated the UN’s role in “the global response to achieve a sustainable, resilient and inclusive recovery from COVID-19.”

At the moment, policy rhetoric is already different from reality. Prevailing today is a recovery where the wealthy become wealthier and the poor sink further into poverty, or an unequal recovery. As rising wealth concentration is matched with greater impoverishment of peoples, especially in the global South, it might as well be called a corporate recovery.

Behind inadequate ambitions: Whose system has been exposed?

Policymakers have already acknowledged that the pandemic and its accompanying crises exposed the faults in current frameworks, that “[w]e cannot respond to this crisis by going back to what was.” But most stop short of questions of history and political economy: In what ways were inequalities entrenched through dominant economic paradigms? Whose systems and policies were exposed by today’s crises?

The HLPF Ministerial Declaration has acknowledged the severity of the crises and war. But many have raised concerns about the commitments being unambitious and inadequate to respond to the systemic causes of the current crises in debt, hunger, ecology, and the unequal burdens arising from the divide among genders and between the global North and South.

In the global South, pre-pandemic inequalities have been alarming—from declining workers’ rights and wages, to rising hunger and healthcare costs—and have been worsening even more amid rising inflation and war. Social movements have long argued that dominant policy norms favouring the interests of finance capital and multinational corporations, have been a systemic barrier to development as they eroded the material basis to fulfill peoples’ needs and rights.

Recent studies, accounting for realities for poverty wages and extraction, have estimated that Northern countries have appropriated USD 152 trillion of resources from the global South since the 1960s. The trillions drained is said to be “enough to end extreme poverty, globally, fifteen times over.”

International finance institutions, especially those led by Northern governments such as the United States, have been key intermediaries entrenching and enforcing policy norms around private interests, and said systemic barriers. The International Monetary Fund and the World Bank Group, since their founding, played key roles through conditionalities in loans, so-called technical assistance, and other ways of meddling in Southern countries. Since the 1980s, alignment with private capital meant a push for the liberalisation, privatisation, and deregulation of economies, commonly called neoliberalism.

In what ways were inequalities entrenched through dominant economic paradigms? Whose systems and policies were exposed by today’s crises?

The HLPF Ministerial Declaration still reproduces positions of the IMF and the World Bank about debt and the role of private capital—in a context where dominant conversations are usually silent about the mechanisms through which inequalities have been entrenched, and development corporatised.

At stake is how the current development agenda risks being fully captured by the interests of a few, and therefore be out of tune with goals for “people, planet, prosperity, and peace.” The HLPF outcome reinforces the risk of a recovery tilted for the interests of profit, one that rests on failed policy assumptions.

First, so-called innovative financing mechanisms, elsewhere supported by IFIs, are advanced in the HLPF outcome. At the moment, these typically include modes of financing reliant on mobilising private capital: from using scarce development aid to attract capital in blended finance, to borrowing with Sustainable Development Goal (SDG) bonds and to Environmental, Social, and Governance (ESG) investing. While such financing show clear benefits for big finance, positive impacts for the people remain dubious. ESG investing has been criticized for not “go[ing] beyond financial returns,” and blended finance for prevailing “unclear” development outcomes. Such assessments should continue to moderate, and even end, the reliance on the private capital in financial markets.

Second, the Declaration supports the pursuit of sustainable projects and infrastructure in the global South. But the perspective of financing rests on blended finance and the lowering of “investment barriers” and addressing “risks” to ensure projects’ “bankability” (profitability). These echo IFI narratives on development and infrastructure, a view focusing primarily on incentivising private investors while downplaying public regulation and the necessity for democratised development planning.

The Declaration similarly asks MDBs, financial institutions, and the private sector to encourage the same “innovative approaches and instruments…from private sources” to enhance financing for climate adaptation. But existing cases of MDB-backed projects show the real risks of greenwashing. In the Philippines, the construction of the Asian Development Bank-supported New Clark City project, lauded for ecosystem-based adaptation, displaced and destroyed livelihoods of farmers and Indigenous People to build a “resilient” city.

Third, aside from lowering investment barriers, a separate paragraph is dedicated to promote increasing foreign direct investments (FDI). This support rests on the pre-pandemic assumption that FDI per se “can reduce inequalities” and can help the global South move away from dependence on exports of primary commodities (agricultural, fuel, mineral products). In contrast, evidence from special economic zones in the global South, as areas constructed to attract FDI, show “hard to detect” benefits to the broader economy: linkages to local firms are limited while looser labour regulations that compromise workers’ rights are pushed.

Fourth, the Declaration welcomes the IFI-backed, inadequate debt initiatives of the G20 and the Paris Club, namely the temporary suspensions on debt servicing and the Common Framework. The document proposes improving these to facilitate IMF and MDBs’ “quick provision of financial support.” However, IFI lending remains ridden with conditionalities, especially on cutting social service spending, that are incoherent with people’s rights and the goal of gender equality. The current debt relief frameworks are aligned to bring back countries’ capacity to pay their creditors, including private creditors who continue to profit as financial crises loom.

The HLPF Ministerial Declaration still reproduces positions of the IMF and the World Bank about debt and the role of private capital.

Beyond a corporate recovery

The oft-cited need for ambition requires a comprehensive reckoning of the crises’ roots in the dominance of capital and the IFI-driven policies which paved the way for such dominance. The roles of existing IFIs in shaping the future of the global South, along with the institutionalised policy bias for private capital in financing sustainable development, should be interrogated. Accountability from IFIs should be on the agenda, through the lens of the people’s right to development and socio-economic rights.

The HLPF was held against a backdrop of people’s resistance—from victorious strikes in Ecuador, to large protests amid crisis in Sri Lanka, to continuing movements responding to climate crisis and to militarism. Moving beyond a corporatisation of development requires affirming people’s sovereignty in development processes at all levels, through the roles especially of social movements and people’s organisations. Strong political will to create democratic spaces is necessary.

The world economy was sick, and now has to recover. But in cases of severe sickness, where the faults of old ways apparent, going beyond recovery and “building back” is necessary, towards initiating fundamental changes that pull at the roots of crises. This should be the case today. #

Online forum: The Cascade/MFD and a just and sustainable recovery: The first review in a pandemic context (September 30)