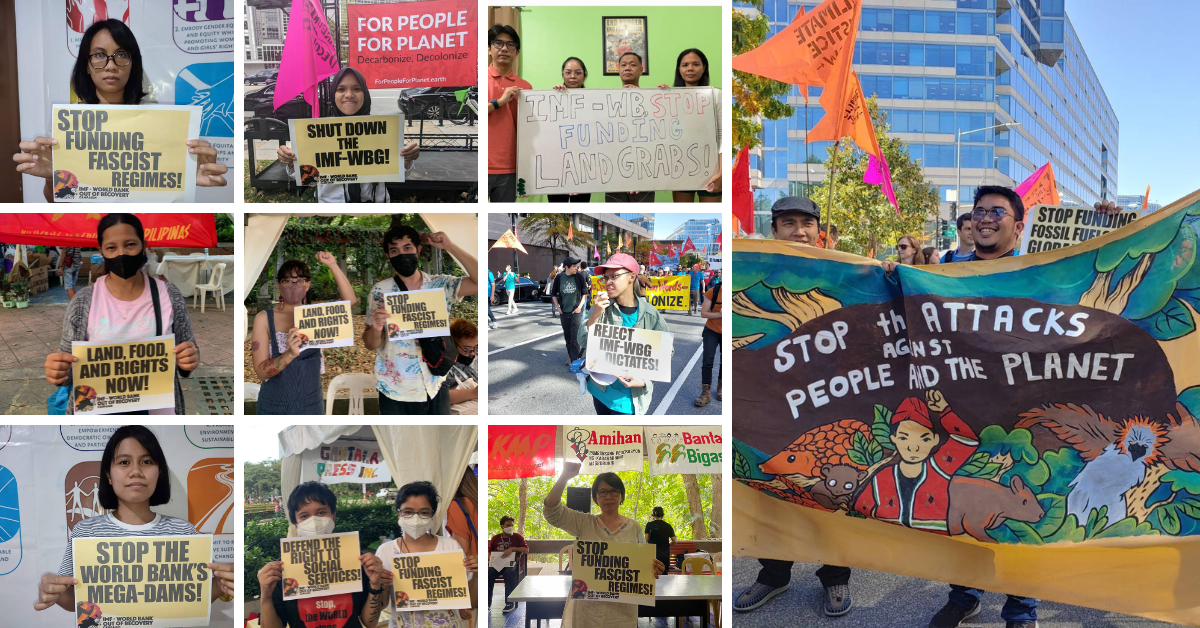 The IMF-WBG Out of Recovery (IWOR) Campaign called to end “IFI meddling in recovery efforts”, towards “redistributing power over economic and development policymaking—away from institutions of monopoly capitalism, and towards the people.”

Amid the Annual Meetings of the International Monetary Fund (IMF) and the World Bank Group (WBG) that was held on 10 to 16 October 2022 at Washington, DC, over 60 people’s organisations and civil society organisations have shown support to a statement opposing the neoliberal directions of the IMF and WBG in the recovery agenda of countries, especially in the global South.

The statement, released by the IMF-WBG Out of Recovery (IWOR) Campaign, clamoured for the accountability of the IMF and the World Bank for perpetuating economies that have worsened poverty, deepened inequalities, and promoted corporate power over public resources and policies. The statement was presented at the Out of Corporate Recovery Virtual Speak-out organised by IWOR last 13 October.

IWOR criticised the debt-driven pandemic responses of the IMF and the Bank. These institutions, according to the IWOR statement, have trapped Southern countries in debt that come with harmful conditions. Governments reduce public spending for healthcare, agriculture, transportation, education, and other social services, to prioritise paying creditors. The statement also called out the danger of continuing corporate capture of the supposed recovery agenda. “A corporate recovery means crisis for the people,” the statement said, as “workers, peasants, women, Indigenous Peoples are at the receiving end of higher taxes, gutted social spending, rising hunger, land-grabbing, harmful projects, and rights violations”.

Celestine Akpobari of the Ogoni Solidarity Forum and the International Indigenous Peoples Movement for Self-Determination and Liberation condemned the corporate recovery of the IMF and the Bank. “Neoliberal conditionalities are a noose on the necks of workers and Indigenous Peoples,” Akpobari said.

The Kilusang Magbubukid ng Pilipinas (KMP, or the Peasant Movement of the Philippines) also expressed their concerns over the IMF and the Bank’s neoliberal crisis responses that harm farmers and market-assisted land reform which entrench elite land monopoly. “The World Bank-backed Support to the Parcelisation of Lands for Individual Titling (SPLIT) undermines the Filipino peasants’ struggle for genuine land reform and food self-sufficiency,” said KMP. “We are determined to counter the IMF-WBG’s policies and impositions that are responsible for rising global hunger and poverty,” they added. Peasant organisations are also currently holding a global month of solidarity this October to amplify their calls for land, rights, and food sovereignty.

Elaine Zuckerman of Gender Action expressed solidarity to the campaign’s calls. “The IMF and World Bank really need to close down,” she said. “They claim to be reducing poverty and helping the poorest countries, but they have consistently promoted neoliberalism that requires countries to undertake measures that make social services inaccessible for poor people. These institutions will not help with recovery as they promise,” Zuckerman added.

At their Annual Meetings, both the IMF and WBG talked about the world’s multiple crises without acknowledging their roles in creating these. To address the fuel and food crises, the Bank recommends further liberalisation of trade, a policy that  has long ravaged local agriculture and food systems in the global South. The Bank’s climate finance initiative, Scaling Climate Action by Lowering Emissions or SCALE to be launched at the upcoming 2022 climate talks, the COP27, should be scrutinised in the context of its track record of plunder and greenwashing. The IMF continues to prioritise big business interests, highlighting the importance of  “buil[ding] investor trust” in recovery plans.

IWOR’s statement raised concerns over the “growing adoption” by these international financial institutions “of rhetoric that seemingly echoes social movements’ calls” that contradict with and even cover up their record of supporting corporate plunder and human rights violations. It called to end “IFI meddling in recovery efforts”, towards “redistributing power over economic and development policymaking—away from institutions of monopoly capitalism, and towards the people.”

The IWOR Campaign is organised by social movements and civil society organisations in the global South to resist the dominance of the IMF and World Bank in the recovery agenda. It will be a year-long campaign towards the October 2023 Annual Meetings in Marrakesh, Morocco. #