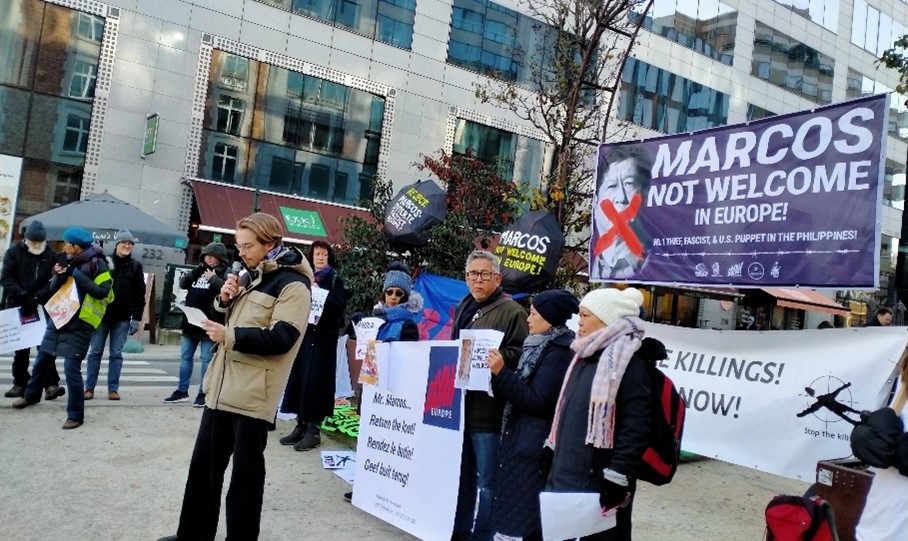 Photo: Protest action by trade unions, civil society organisations, migrant organisations, and human rights defenders against rights violations in the Philippines, at the Schuman Roundabout in Brussels, greeted heads of states making their way to the EU-ASEAN Commemorative Summit.

Brussels, Belgium – At the European Union (EU)–Association of Southeast Asian Nations (ASEAN) Commemorative Summit on 14 December 2022, the EU pushed for investment diplomacy, announcing a EUR 10 billion investment package to ASEAN countries. Akin to its declaration during the EU-Africa Union Summit earlier this year, EU’s effort is an bid to consolidate the global geopolitical and economic position of the 27-country bloc against the growing influence and power of China and Russia.

While the summit was held to commemorate 45-year relationship between the EU and the ASEAN, the geopolitical importance of this summit, in the face of the war in Ukraine and the military tensions in the Pacific between China and the United States and their allies, cannot be overemphasised. The EU’s strategy for cooperation in the Indo-Pacific, released in 2021, underlined that “the increasing tensions in regional hotspots such as in the South and East China Sea and in the Taiwan strait may have a direct impact on European security and prosperity”.

ASEAN leaders reportedly hoped to clinch a subregion-wide free trade agreement with the EU, hoping to leverage its strategic importance to the world’s most developed and militarily powerful countries. The EU is the second largest provider of foreign direct investments (FDI) and the third largest trading partner of the ASEAN in 2021.

Relations between the two blocs started in 1977 when formal dialogues were established, that was elevated to the status of strategic partnership in 2020. Five of the 10 ASEAN members are beneficiaries of the EU’s Generalized Scheme of Preferences, an arrangement that removes or reduces import duties on certain products coming from “vulnerable developing countries”.

As EU countries risk heading to another recession amid protracted economic crises, the EU announced its Global Gateway programme, pushing for private investments and other commercial interests abroad through so-called international partnerships. The EUR 10 billion investment pledge of the EU to the ASEAN will be focused on business interests in energy, transport, digitalisation, and education. Trade and sustainable value chains in the sub-region will also be promoted, supporting the EU’s infrastructure offensive to “resolve” its lacklustre economic performance over the last decade and impact of the Covid-19 pandemic.

While the ASEAN leaders failed to move substantially forward with a free trade deal, they agreed to be open in pursuing other avenues for economic cooperation and bilateral free trade agreements, which threaten to be lopsided in favour of the EU amid the underdevelopment of many ASEAN economies. Other areas of cooperation centred on the digital economy, climate, environment and energy, health innovation and vaccine exports, and geopolitical issues.

The EU contradicts its own human rights instruments in furthering diplomatic and economic relations with ASEAN governments with terrible human rights records and repressive regimes such as the Philippines, Myanmar, Indonesia, Thailand, and Cambodia. People’s movements, civil society organisations, trade unions, and other groups that are critical of government policies and practices have been restricted, vilified, criminalised, red-tagged, among others. These violations of rights and freedoms are widely documented including by multilateral institutions such as the United Nations.

The EU and ASEAN declaration of shared commitment to “promoting and protecting human rights and fundamental freedoms and advancing sustainable development” remains a broken promise as long as economic and geopolitical interests trump genuine developmental interests of the poor majority, human rights, and democracy.

Forum on the Philippine Elections: Results and Prospects [25 May, Belgium]