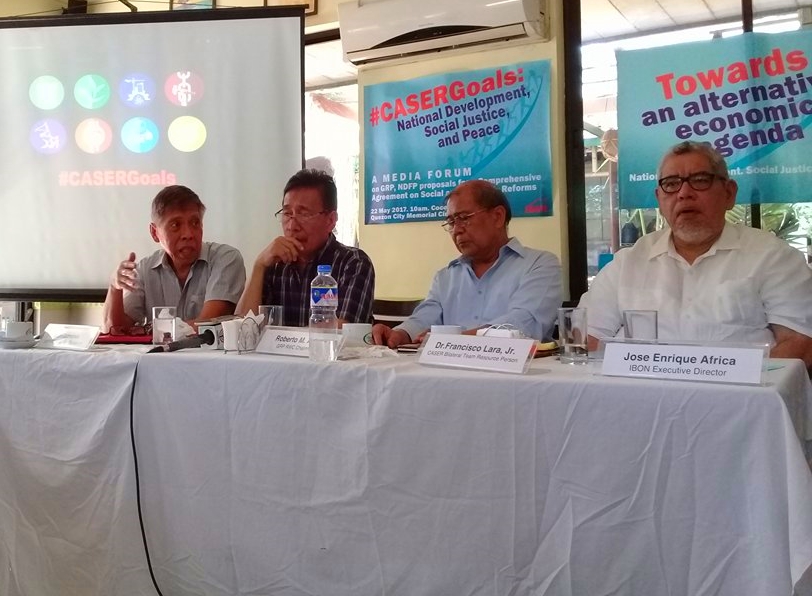 [[{“type”:”media”,”view_mode”:”media_large”,”fid”:”1700″,”attributes”:{“alt”:””,”class”:”media-image”,”height”:”310″,”style”:”width: 350px; height: 226px; margin: 5px; float: right;”,”typeof”:”foaf:Image”,”width”:”480″}}]]From May 27 to June 1, panels of the Government of the Republic of the Philippines (GRP) and the National Democratic Front of the Philippines (NDFP) would continue discussions on land reform in attempts of resolving contentions on the Comprehensive Agreement on Socio-Economic Reforms (CASER). CASER is pivotal to the future direction of the Philippine economy, and common ground between the GRP and NDFP on these socio-economic agenda is seen as one of the most important conditions in forging a just and lasting peace in the Philippines.

The talks from late April to early June will be the fifth round of negotiations, following the previous round last April 2 to April 6 in the Netherlands.

Representatives from both GRP and NDFP panels discussed the current progress of talks on the reforms, and their respective proposals, inthe launch of a national advocacy campaign on CASER last May 22.The forum and the campaign were organized by the Philippine research center, Ibon Foundation, and attended by Philippine media practitioners, people’s organizations,including IBON International.

For the NDFP, necessary socio-economic changes are premised on agrarian reform towards rural development, and national industrialization – which would mean greater public control over the economy to start key industries. In the media forum, GRP panellists agreed on the need for agrarian reform.

Both panels highlighted the need to fast-tracking past land distribution commitments, such as the “backlog” on Philippine land distribution programs. According to Alan Jazmines of the NDFP-Reciprocal Working Committee on Socio-Economic Reforms, this would be made outside of the outcomes of the current negotiations but would be done “in the spirit of CASER.”

According to Dr. Francisco Lara Jr., CASER Bilateral Team Resource Person, under CASER, land would be distributed for free [to be paid by the State], in contrast to old scheme of requiring payments (“amortizations”) before giving farmers certificates of land ownership. On the other hand, uncollected payments on lands would be deemed cancelled, according to Roberto Ador, Chairman of the GRP-Reciprocal Working Committee.

A qualified definition of land reform was also part of the progress of the talks. “Land reform, now, means not only ownership [of land], but farmers’ occupancy of lands,” Lara said. This is inresponse to issues in past Philippine land reform programs, where peasants would be awarded land titles with them being unable to till the land.Jazmines has raised the issue that some landlords have “re-feudalized” and “re-monopolized” lands.

Nevertheless, “contentious” matters remain on talks on agrarian reform. Among others, these include resolving differences between important categories used in the agreement; on whether certain landlords who unjustly occupied land be repaid on account of State confiscation; and on which body will implement land reform.

Talks on national industrialization are currently in their initial stages, with Ador stating that bilateral working groups have been beginning informal talks. Jazmines said that more studies will be needed in resolving important questions regarding this agenda.

Organizations, including IBON International, see the reforms on land and national industries as important elements in moving away from the growth model of the Philippines. Currently, the country is reliant on agricultural exports and the influx of foreign monopoly capital, at the expense of low-waged labor, houseless urban poor, landless peasants, indigenous peoples and national minorities. This is sustained by a policy track of trade liberalization, privatization of social services and de-regulation of sectors.

[[{“type”:”media”,”view_mode”:”media_large”,”fid”:”1701″,”attributes”:{“alt”:””,”class”:”media-image”,”height”:”305″,”style”:”width: 350px; height: 222px; margin: 5px; float: right;”,”typeof”:”foaf:Image”,”width”:”480″}}]]He referred to how even capitalist countries such as the United States are showing signs of “retracting” from the neoliberal policy framework that encourages on the one hand, the State to surrender its roles to the private sector, and on the other, transnational corporations to dominate national economies. According to Africa, the Philippine experience on the other hand shows the failure of neoliberalism in uplifting the condition of the majority of its peoples.

At this point, Africa said, the Philippines has no reason to continue the decades of following the neoliberal track in macro-economic policy.People’s organizations in the Philippines see how the socio-economic reforms under CASER can point to this direction.