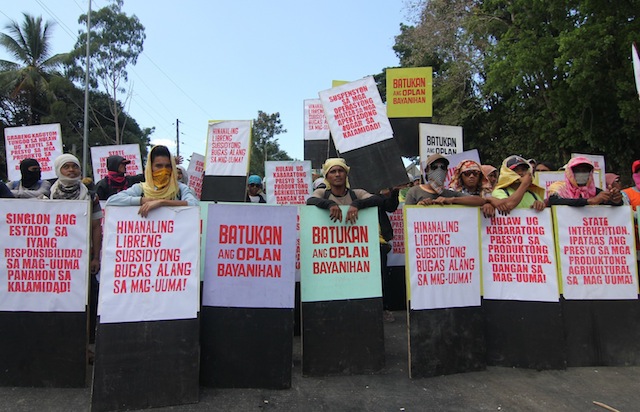 On International Human Rights Day, IBON International expresses its solidarity with the peoples of the world, especially the marginalized, that continue to assert their individual and collective rights.

We stand in solidarity especially with those who continue to resist through collective action the neoliberal attacks on their rights to livelihood, amid free trade negotiations such as the Regional Comprehensive Economic Partnership (RCEP). We also stand with the indigenous peoples of the world in claiming their rights to self-determination and their ancestral lands, and the millions of farmers who fight for land and food sovereignty — amid continuing violence of state forces and corporate plunder.

IBON International also acknowledges that the peoples’ claim of their rights continues beyond the International Human Rights Day. We manifest our continuous solidarity through knowledge-building and capacity development efforts that enable the people’s empowerment.

In support of the struggle for people’s rights, IBON International participated in an International Solidarity Mission (ISM) for the indigenous peoples and farmers of Kidapawan City, North Cotabato last July 2016. It can be recalled that last April 2016, 6,000 farmers who were demanding the local government to release the 15,000 sacks of rice supply from the allocated calamity funds were violently dispersed by police and military elements.

Below is a reflective account written by a contingent of IBON International staff who were part of the solidarity mission. IBON International acknowledges that the Kidapawan case points to the continuing struggle of farmers and other marginalized sectors in asserting not only their right to freely assemble, but also to an adequate standard of living, which includes adequate food and genuine improvement of living conditions (See Art. 11, Sec. 1 and 2 of  the International Covenant on Economic, Social, and Cultural Rights).

We were assigned to be a part of the International Solidarity Mission (ISM) teams in Southern Mindanao. The ISM gave us the opportunity to immerse into the daily lives of the Lumads (indigenous people in Mindanao) who were harassed and forcedly dispersed from their ancestral lands. Furthermore, the ISM granted us the opportunity to talk to the farmers — victimized by a violent dispersal during their protest in Kidapawan City last April 2016 — about persisting oppressed conditions in their region. For most of the participants in the ISM, including us, it was the first time to be face-to-face with these farmers who were directly involved in the protest, where 3 people were killed and 37 were injured by police and military elements.

With the other delegates from Portland Committee for Human Rights in the Philippines (PCHRP) along with GABRIELA-Portland, Portland Rising Tide and New York Committee for Human Rights in the Philippines (NYCHRP), we stayed in United Methodist Church (UMC) in Kidapawan City, North Cotabato. The church served as the sanctuary of the 6,000 farmers during the Kidapawan massacre. There we met Lumeriano Agustin, a farmer who was seriously injured in the violent dispersal. He personally shared to us, detail by detail, how he suffered from the incident.

This act of state violence instigated an international campaign to help raise awareness on the struggles of farmers in Mindanao which received an outpour of support. The Asian Peasant Coalition (APC), for instance, condemned the violence against the protesting farmers and stressed that the small farmers, who have no alternative livelihoods, are also the ones severely affected by natural calamities. Also, the International League of Peoples’ Struggle (ILPS) Commission 6 said that this is not the first time that an Aquino was involved in the massacre of farmers. The violent dispersal in Kidapawan was reminiscent of the Mendiola massacre in 1987 and the Hacienda Luisita massacre in 2004.

The province of North Cotabato also suffered from a severe drought, which gravely affected the productivity of agriculture and spelled hunger for thousands of farmers and farm workers. This situation is not new to them. They have been experiencing annual droughts for decades yet not a single administration was able to implement an effective solution to this recurring problem. The local government has declared a state of calamity in Noth Cotabato (and other provinces) but no direct assistance was given to the farmers. The national as well as the local governments failed again to prepare and execute contingency plans even to mitigate the impact of drought. The P19 B mitigation fund that was approved on December 15, 2015 also did not reach the affected farmers and their families. It is apparent that grave incompetence and gross negligence was exhibited in this case by the former administration.

The famine in Mindanao has meant a 70% to 100% drop in harvest. Water resources, which serve as the lifeblood for crop productivity especially during El Niño, remain inaccessible for the farmers. According to the Kilusang Magbubukid ng Pilipinas (KMP), 1.34 million hectares of irrigable area remain unirrigated, while the National Irrigation System (NIS) imposes exorbitant fees to the farmers for the irrigatation of fields.

This natural calamity, experienced yearly by the farmers of North Cotabato, has also been aggravated by the long-enduring feudal set-up in the country’s agricultural sector. It is important for the government to recognize and resolve the root causes of the vulnerability of the peasant sector: landlessness and the lack of access to agricultural services for production. Only through a genuine agrarian reform can the farmers free themselves from hunger and poverty.

This is indeed the greatest paradox of our time: those who produce food for our tables are the ones without food on their tables. The feudal system in agriculture has been the cause of suffering to our farmers for decades now. Farmers have been victims of land grabbing since the encomienda system of the colonial era up to the current land grabbing schemes (e.g. land use conversion) perpetrated by political and economic elite. Until now, farm workers labor from dawn to dusk in exchange for meager wages. When they try to seek the government’s attention to their conditions, their calls are met with violence and repression.

But the peasant struggle continues. Decades of bloodshed have just made these lands more and more fertile for resistance.

We appreciate the overwhelming international solidarity displayed by the delegates who came from different parts of the world to join the immersion missions. We are amazed with
how passionate they are in helping our “kababayans.” Despite the adversities that the Mindanao farmers experience, they are not to be pitied but rather honoured as they continue to fight and call for land, food, and justice. People’s resistance are usually met with state violence. Therefore, rights are not simply handed over to the people. It is imperative for the people to stand up and assert their rights. #