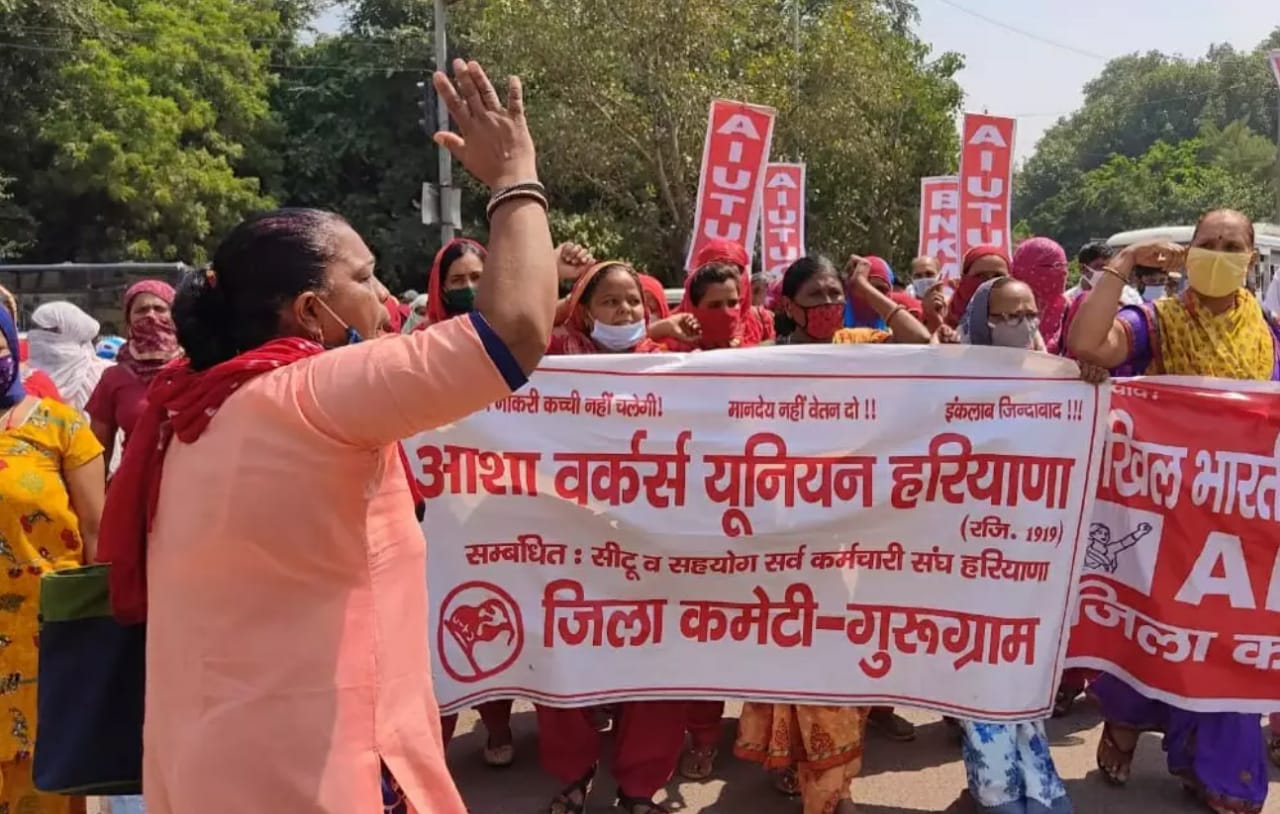 In photo (© IndistriALL Global Union): Over 250 million workers and farmers in India participated in a historic general strike to oppose the government’s neoliberal policies.

We call for greater solidarity among people’s movements and civil society who are already rejecting and fighting current oppressive systems towards realising the full range of people’s rights and sovereignty for a truly people-centred development.

On Human Rights Day, IBON International joins people’s movements in asserting rights especially of marginalised peoples. We are in solidarity with peoples mobilising today to raise critical rights issues in their countries, especially amid a global tide of militarism and political repression. We remind states and intergovernmental institutions of their duty to uphold people’s rights and dignity.

Human Rights Day is observed all over the world every December 10 since the United Nations General Assembly adopted the Universal Declaration of Human Rights (UDHR) in 1948. The UDHR sets an international standard in upholding people’s inherent dignity and inalienable rights. This year’s Human Rights Day is closely linked to people’s movements to end violence against women. It is the culmination of the campaign against gender-based violence which began on the International Day for the Elimination of Violence Against Women on November 25, followed by the 16 Days of Activism Against Gender-Based Violence. But even before the adoption of the UDHR and beyond the UN framework, peoples throughout history have been asserting for their rights and sovereignty to realise collective aspirations for freedom from all forms of oppression, and peace based on social justice.

The neoliberal economy reared by international financial institutions and development banks in elite-led states compromises people’s rights and stunts the democratic participation of communities, people’s organisations and civil society. The COVID-19 pandemic expedited multiple global crises that led to a worse rights situation for marginalised peoples. The pandemic was also used as a pretext for repression and saw an alarming rise in human rights violations. The Office of the High Commissioner for Human Rights reports its “profound, multi-faceted blows” to human rights including to “vital civil liberties.”

At the onset of the outbreak, many governments used the situation to acquire emergency powers leading to abuses and rights violations. In many countries in the Global South, thousands were brutalised, arrested and detained for lockdown and curfew violations. The hastily enforced lockdowns strictly imposed on the poor displaced millions of workers, including daily wage earners, without adequate social protection. Meanwhile, big corporations received enormous government support, and have even increased their wealth amid crises. People’s organisations and civil society doing relief work were blocked and harassed by state forces. Domestic violence against women and children also increased.

Today on Human Rights Day, a trade union organiser and a journalist were arrested in Metro Manila, Philippines. We reiterate the Filipino people’s demand for an immediate independent international investigation of the rights situation in the country. We urge the international community to heed our people’s clamour  to obtain justice for victims and to end the state-perpetrated killings and attacks.

Last year’s massive protests also halted at the onset of the pandemic, emboldening many authoritarian governments to maximise the situation to consolidate their regimes. The previous US-supported interim government in Bolivia, that overturned many of the country’s key progressive policies, postponed the election multiple times, even when lockdown was already eased, in an attempt to extend power.[i]In Chile’s early days of lockdown, protest art works were taken down in the capital city, Santiago, and right-wing President Sebastián Piñera also delayed a referendum to scrap the Pinochet dictatorship-era constitution, one of Chileans’ demands in last year’s massive anti-neoliberal protests.[ii] Former US President Trump, who was defeated in the recent election, tried to suppress mail-in votes[iii] and votes by Black people and even “encouraged his supporters to commit voter fraud”[iv] to secure his position. In Kenya, the police fired teargas against commuters scrambling to get home before curfew and even harassed healthworkers.Thailand’s militarist government enforced censorship of COVID-19-related news and severely punished “violators” including those who expressed criticism against the government in social media.[v] In Indonesia and India, governments responded to the neoliberal economic crisis triggered by the pandemic with worse neoliberal policies that would harm workers’ rights[vi] and smaller farmers’ livelihood.[vii]

In the Philippines, president Rodrigo Duterte’s government railroaded in congress and now aggressively implements the Anti-Terror Act, widely criticised for impinging on civil-political rights. Since the implementation of the terror law, “red-tagging” against people’s organisations and civil society who voice out legitimate demands and concerns has been more rampant. “Red-tagging,” or branding legal progressive organisations as communists, is an attempt to discredit their work and their demands, and has proven to endanger their lives. More activists have also been illegally arrested and detained on false claims, such as peasant organiser and nursing mother Amanda Echanis, who was arrested together with her 1-month-old newborn on December 2 by combined forces of the police and the military. Prior to Amanda’s arrest, other activists who are nursing mothers have already been detained and separated from their infants, with one case resulting in the infant’s death after being deprived of nutrition and care from the mother. Today on Human Rights Day, a trade union organiser and a journalist were arrested in Metro Manila.

IBON International is always in solidarity with people’s organisations and movements in their fight for rights and sovereignty. Resistance embodies people’s inherent dignity and inalienable rights. Peoples who are oppressed and deprived will naturally fight back to assert their humanity, and to reclaim what should be accorded to all human beings – the right to food, livelihood, social services, and democratic participation.

But the worsening political situation only erupted in greater resistance. In Bolivia, indigenous and working people protested against the past interim government’s postponement of the election with roadblocks and barricades.[viii] They successfully voted out the interim government and democratically elected officials in October. In Chile, after massive protests since last year, the people successfully voted to scrap the old neoliberal and elitist constitution and the drafting of a constitution that would protect and uphold the rights and welfare of the poor.[ix] The massive protests against racism and police brutality in the US heightened indignation against Trump’s pro-big business and racist governance, and even revived similar demonstrations in several parts of the world.

In Kenya, people held mass demonstrations to demand for social amelioration and the end to police brutality and extrajudicial killings. Millions of Thai youth have flocked to streets to protest against their military-based constitution and government repression of critics. Indonesian workers and Indian farmers organised strikes to oppose the disastrous neoliberal policies proposed by their governments. In November, over 250 million workers and farmers in India participated in a historic general strike to oppose neoliberal policies.[x] In the Philippines, progressive groups have filed dozens of petitions against the terror law and continue to mobilise to pressure the government to overturn the unconstitutional law. A civil society-led international investigation has also been initiated amid lack of domestic mechanisms to exact accountability from perpetrators and justice for victims.

IBON International is always in solidarity with people’s organisations and movements in their fight for rights and sovereignty. Resistance embodies people’s inherent dignity and inalienable rights. Peoples who are oppressed and deprived will naturally fight back to assert their humanity against powerful forces that intend to dehumanise them, and to reclaim what should be accorded to all human beings – the right to food, livelihood, social services, and democratic participation for a healthy and meaningful life.   We are in awe of the ingenuity of people’s resistance that managed to overcome the limitations and restrictions of the pandemic to assert rights and sovereignty.

We condemn the rapid deterioration of human rights under elite-led states and the failure of governments to uphold rights and democracy. We urge intergovernmental institutions to exercise more initiative and deliver meaningful responses to protect people’s rights especially in the absence of government actions in countries with critical rights situations.

As a civil society organisation headquartered in the Philippines, IBON International is witness to and even directly threatened by the attacks of Duterte’s militarist and repressive regime. We reiterate the Filipino people’s demand for an immediate independent international investigation of the rights situation in the country. Killings of the urban poor and activists are an everyday reality in the country. State attacks against progressive groups and activists are escalating, including illegal arrests and detention. The domestic justice system has proven itself inadequate and sorely fails victims, as a culture of impunity among state perpetrators prevails. We urge the international community to heed our people’s clamour and support our demand for an international investigation to obtain justice for victims and to end the killings and attacks.

We call for greater solidarity among people’s movements and civil society who are already rejecting and fighting current oppressive systems towards realising the full range of people’s rights and sovereignty for a truly people-centred development.###

Break with current assumptions: Financing sustainable development in 2020 and beyond