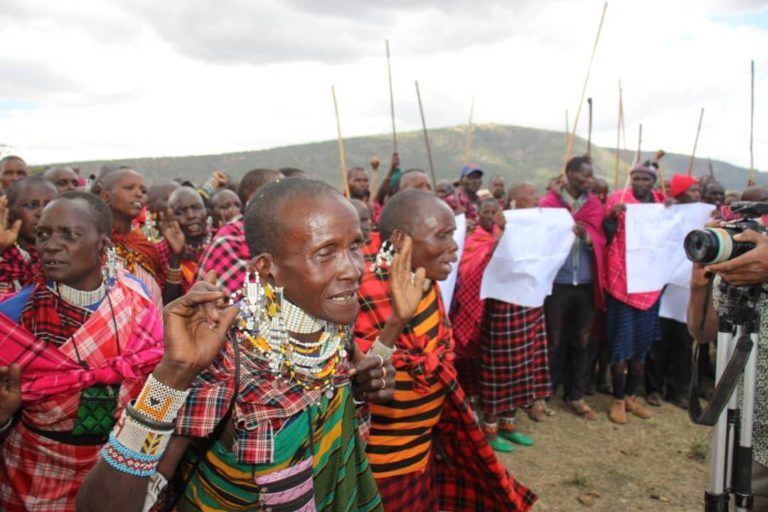 Photo by Oakland Institute via Mongabay

The Maasai communities are determined to live in their ancestral lands, continuing to resist the longstanding assault on their rights and the ecological integrity of their land.

On June 9, Maasai Indigenous People, who were protesting against government eviction plans, suffered serious injuries after violent response by authorities.

The day before, around 700 police were dispatched to the Loliondo division of Ngorongoro district in Northern Tanzania to demarcate 1500 square kilometres of land, following a plan to change the status of the area to a Game Reserve. Maasai communities gathered to protest. Authorities attacked the community with live bullets and teargas leaving over 30 people wounded and 1 dead.

Some of the Maasai were forced to travel to Kenya for medical attention since the government has denied them access to healthcare.

In Tanzania, the government demarcates areas as Game Reserves, in the name of conservation. But these areas tend to be used for commercial, safari tourism, and the hunting of wildlife. Communities and civil society say these primarily benefit corporations investing in these economic activities, while forcing local communities to vacate their ancestral lands.

The government has aggressively pushed ahead with the evictions of the Maasai community from Loliondo despite criticism by civil society groups and indigenous communities around the world.

So far, 40 households, among them 237 people both from Maasai and Hadzabe communities, together with their livestock, have been evicted to Msomera village, 600 kilometres from Loliondo, according to a Regional Commissioner. Uncertainty awaits families who refused the voluntary “relocation” away from the Loliondo area.

The Loliondo division is located within the 14,036 square kilometre Ngorongoro district. Ngorongoro, one of the seven districts of the Arusha Region in Northern Tanzania, is home to the Ngorongoro Conservation Area (NCA), a UNESCO World Heritage Site.

The business of trophy hunting

The recent case was not unprecedented. Mass evictions against the Maasai community took place in 2014 for the same reasons of making way for a wildlife corridor. The plan turned out to benefit the investment interests of the United Arab Emirates-based company, the Otterlo Business Corporation (OBC) to turn the land to a private game park. OBC acquired an exclusive hunting permit in Loliondo for 4,000 square kilometers.

Since then, the UAE-based firm has been lobbying to have an additional 1,500 square kilometers of the land cleared of human settlement for uninterrupted trophy hunting. This has led to confrontations between the Maasai pastoralists and the local police, including a court case.

In 2018, the East African Court of Justice, following assertions of the Maasai community in Tanzania, issued an order prohibiting the government from evicting communities from their ancestral land.

Despite this, Tanzanian government is currently preparing to implement a multiple land use and a resettlement plan in the NCA. Under the plan, the NCA will be divided into 4 zones. Eighty-two percent of the land, currently used for indigenous livelihoods of pastoralism and livestock herding, will be designated as “conservation area.” The remaining 18% will be used tagged for multiple land use. If these plans prevail, between 80,000 to 167,000 Maasai would be displaced from their lands.

The Tanzanian President Suluhu’s administration has dismissed indigenous assertions of their rights over the lands as ancestral domains.

The Tanzanian Prime Minister Mr. Kassim Majaliwa has downplayed the claims on Maasai evictions. He claimed that the communities will be “relocated” to 162,000 hectares of government land in Handeni district, a decision the communities do not consent with, for fear of losing their livelihoods.

The Maasai Indigenous Peoples have been asserting their right to self-determination and to free, prior and informed consent. They have the right to freely determine their political status and pursue their economic, social, and cultural development. The Maasai communities are determined to live in their ancestral lands, continuing to resist the longstanding assault on their rights and the ecological integrity of their land.

The struggle of the Maasai has garnered solidarity from around the world. Social movements, Indigenous Peoples, indigenous rights defenders and other advocates have called out the Tanzanian government for rights violations and called for upholding the rights of the Maasai community in Tanzania. Maasai leaders in Kenya are in solidarity with Maasai of Tanzania. Leaders in Kenya’s Narok County condemned the Tanzanian Government for evictions. #